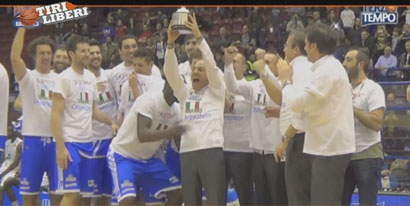 The best season ever of Dinamo Sassari, enhanced by the historical conquest of the Coppa Italia, a goal, for Sardinian sport, which is second only to the 1970 scudetto, won by Cagliari leaded by Gigi Riva. Words of the protagonists make emerge the elements that can make a small club successful, in an era deeply marked from the business. It has been an incredible triumph, considering that the club played just four seasons in the most important Italian basket league. In this season, apart from the Coppa Italia, the Sardinian club reached the “Top 16” of Eurocup and the playoff semifinals of Italian Serie A. Possibly the missed victory of scudetto being the only little regret of a small club which became the symbol of Sardinian Basket in Italy and Europe.