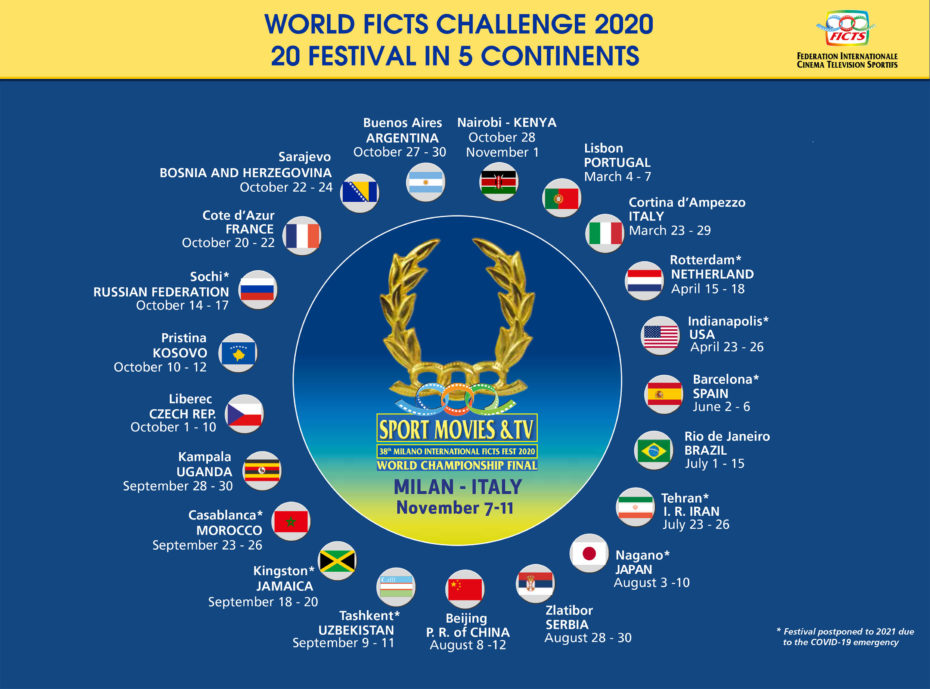 FICTS – Federation Internationale Cinema Television Sportifs (121 Member Countries), recognized by the International Olympic Committee for which it promotes Olympic and sports values​ through footages, promotes and organizes every year freely, the Worldwide Championship of Sport, Cinema and Television “WORLD FICTS CHALLENGE”  programmed in 20 Festivals in  five Continents. Winning productions of each Phases (max 8/min 10 productions) will be automatically admitted to the Final Phase. “World FICTS Challenge” is the main presentation where FICTS is used for the promotion and spread of Olympic values ​​and sport culture, a competition for movies and television productions from 5 Continents, scheduled in 16 phases including Worldwide Final. Through the “World FICTS Challenge”, Federation promotes all around the world, the quality of sports images and cooperation of those who work creatively in sports broadcasters and sport cinema. FICTS supports producers and directors in authorization process of charges for the use of Olympic heritage through its collaboration with IOC Foundation for Culture and Olympic Heritage. FICTS provides for the Local Organizing Committees, 50 productions, Short, Documentaries, Olympic videos and 7 Exhibitions, a strong promotional activities on the launch and promotion (emails sent directly to producers, directors, Olympic Committees, sport Federations with a mailing list of 65.000 contacts), possibility to consult the videos archives, advice and assistance to the organization, facilitation contacts with movie houses of production. Each of the “World FICTS Challenge” Festival  promotes an action similar to International Olympic Committee strategy in order to keep the interest in world sport companies, encouraging them to practice physical activity and Olympism. The event is characterized by high sport and organization quality as well as a wide international participation (journalists, professionals and industry experts, sports champions), that produces a strong media, tourism and economic impact in the region, promoting the area’s image abroad. The Festivals of the “World FICTS Challenge” are articulated into Screenings, Meetings, Workshops, Exhibitions, Sides Events and Awards.The events are a valuable promotion tools of educational values and training that sport expresses and qualified international spot for the hosting cities and their Countries through media, broadcasters, global networks, new media, productions companies, producers, directors, Olympic Committees and Sport Federations, sports champions, radios, advertising and communication agencies that illustrate the world of sport cinema and TV  through documentaries, spot, fiction, cartoons, etc.

All the Festival of “World FICTS Challenge” are part of “ISFAF – INTERNATIONAL SPORTFILM FESTIVAL ASSOCIATION FICTS” (with seat in Milan – Italy). The purpose of the Association is the promotion and development of any initiative aimed at improving the artistic quality and communicative value of “Sports-area Film Festivals” through the mutual collaboration of all those recognized and through the media – cinema, audiovisual, publishing, web – in the idea of a free, democratic, civil and pluralist cultural production. The Association aims to offer a series of activities oriented to the satisfaction of knowledge needs, in-depth study, updating, training and cultural and professional qualification of the subject “film festivals” in the context of communication with specific reference to the identification, recognition, associative force and coordination of the sports-area cinematographic events that are recognized in the characteristics attributed by the annexed regulation in the category “Sports Film Festivals”.

The Festival of “World FICTS Challenge 2020” are: