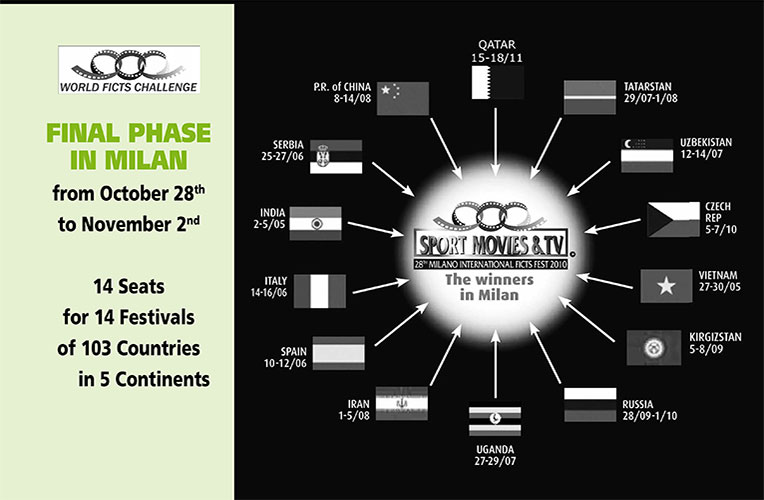 The FICTS (Fédération Internationale Cinéma Télévision Sportifs, joined with 103 Countries) recognized by IOC – International Olympic Committee promotes and organizes every year, at the end of October, in Milan (Italy), with free entrance for the audience, “SPORT MOVIES & TV”, the FINAL PHASE of “WORLD FICTS CHALLENGE”. The winning works of each Phases of the “WORLD FICTS CHALLENGE” will be automatically admitted to the Final Phase of the Festival in Milan.

The FICTS Board of Trustees – by December 20th of every year – will analyze and approve candidacies for the “WORLD FICTS CHALLENGE” of the next year. All the Phases will be held not later than August (different dates can be approved singularly by FICTS Board of Trustees for special reasons). The requests of the nominations to seats of “WORLD FICTS CHALLENGE 2010” will be: Mumbai (India), Barcelona (Spain), Cholpan-Ata (Kirgizstan), Da Nang (Vietnam), Belgrade (Serbia), Kazan (Russia), Beijing (China), Tashkent (Uzbekistan), Tehran (I. R. Iran), Caserta (Italy), Lipetsk (Russia), Kampala (Uganda), Liberec (Czech Rep.).

The World-wide Final will take place to Milano (Italy) from October 28th to November 2nd 2010.

THE FESTIVALS OF THE “WORLD FICTS CHALLENGE”

The “4thMumbai International FICTS Festival” cured by Mr. Ritesh Sinha Chairman of “Ten Film” will take place from 2nd to 5th May. The phase of the “World FICTS Challenge” in Mumbai creates a wonderful opportunity for filmmakers from across the world to come and interact with the Indian film reality. The quality of projections and the presence of famous personalities of the cinema contributed to the success of the 4th edition of Festival in collaboration with “NDTV Sport”.

The city of Da Nang, among the greatest cities of the Vietnam situated on the western river of the Hán, will host the Asian Phase of the International Circuit of the “World FICTS Challenge” that will take place from 27th to 30th May. The “5th Vietnam International FICTS Festival – Sport, Tourism, Movies & Tv” is organized by Mr Nguyen Xuan Vinh, Director of the Vietnam Center of Tourism, Sport & Cinema (Vietnam Sport Cinema) and FICTS President for Asia, by the “Vietnam Television” and “Da Nang Television”. There are 6 competitive Section: 1. Documentary and reportage; 2. Movies; 3. Education and didactics; 4. TV shows;  5. Cartoons; 6. Adverts. Every Section have a Jury that will award with Merit and Participation Diploma and one money prize. The Festival, broadcasted live by the Vietnamese Television of State, is articulated in International Meeting “Vietnam’s sport and tourist cinematography and television potential-opportunities for cooperation and development”, a Meeting with students from tourists, sport, television and cinematography colleges, sport athletes and tourist guides in Da Nang city. There will be an photo Exhibition on “Sport & tourist moments and the beauty of profession”.

All the information about the “5th Vietnam International FICTS Festival – Sport, Tourism, Movies & Tv” are available.

Barcelona (Spain) will accommodate, from June 10th to 12th, the “1st BCN SPORTS FILM – Barcelona International FICTS Festival”. The Festival is organized by the “Fundacio Olympic Barcelona” whom aim is the spread of Olympic Games Barcelona 1992 and the promotion of the ethical, cultural and historical values of the sport in collaboration with the “Nikita Distribution” enterprise of distribution of audiovisual contents of sports thematic with international vocation and by the “Ayuntament of Barcelona” that confirm its engagement to upgrade its essence of capital of the sport. The Organizing Committee of the Festival has received more than 100 videos coming from 30 Countries among which Netherlands, Finland, New Zealand, Portugal, Italy, etc.

There will be four prestigious seats that will accommodate the event: the “Museu Olímpic i de l’Esport” of Barcelona, situated in the heart of the Parc de Montjuic, beside the Olympic Stadium, the “Centre Excursionista de Catalunya”, the most ancient Spain sport institution in the center of the Barrio Gótico, the “Library Francesca Bonnemaison” the first library for women of all Europe, one of the points of the cultural life of the city and the “Palace of Ayuntament of Barcelona” that will accommodate the “Closing Ceremony”.

All the info about the “BCN Sports Film – Barcelona International FICTS Festival” are available on the official Festival website http://www.bcnsportsfilm.org/

In the splendid setting of the palace of Caserta will take place, from June 14th to 16th, “FILMARE – International FICTS Festival”, in the within of the plan “One sea of energy” organized by the Provincial Committee of the NOC of Caserta, by the FICTS Italia with the Sponsorship and the support of the Region of Campania. Besides the Exhibitions (“Ayrton Senna – an unforgettable champion” and “The poster of the Sport Cinema”), are in programme projections of national preview.

Belgrade (Serbia) will host, from June 25th to 27th, the “2ndBelgrade International FICTS Festival”, organized by the “Foundation for Sports and Olympism” in collaboration with the FICTS, the Serbian Olympic Committee presided by famous NBA player Vlade Divac and the “Yugoslav Film Archive”. The Festival, directed by Marko Stojanovic, FICTS Coordinator of the Culture, Education and Young people Committee, is in partnership with the WOA “World Olympians Association” presided by Dick Fosbury, by the Sport Journalists Association of Serbia (AIPS members), the “Yugoslav Film Archive”, the Serbia National Television and the “Association for Economic Propaganda of Serbia”. The projections will be shown in the Museum of Sports and Olympism as well as in the Museum of the Yugoslav Film Archive.

Tashkent (Uzbekistan), capital of Asian Republic of Uzbekistan, will accommodate – from July 12th to 14th – the “5th Tashkent International FICTS Festival”. The Festival is organized by the V. President of FICTS Mr Sabir Ruziev, President of Uzbek Fencing Federation and new President of Uzbek Federation Cinema Television Sportifs in collaboration with the FICTS, under the patronage of the Uzbek Olympic National Committee, the State Tv Ministries, with the support of Uzbek Olympic National Committee, the Uzbek Federation of Football, Box, Athletics, Fencing, Fight and the “State Tv Ministries”. The “Award Ceremony”, at the presence of media and prestigious personalities of the sports and show world, have taken place to the “Palace of Cinema” of Tashkent.

The “3rd Kazan International FICTS Festival” will take place to Kazan, in the Republic of Tatarstan (Russia), 29th July – 1st August 2010. Kazan will be also the center of the student Games in 2013. The Festival is organized by the “New Cinematograph Company” in collaboration with the Ministry of the Culture of the Republic of Tatarstan, the Ministry of the Sport and the Russian Olympic Committee. Main sponsor of the manifestation is TatOil. Besides directors and producers, famous personages of the sport between which Vladimir Petrov, players of the volleyball team Zenith Club and of the Rubin Kazan Football Club will take part to the Opening and Awards Ceremonies. There will be an exhibition with the best images shoot by two sports photographers Golovanov and Grindin.

After the success of public and critic recorded from the 1st edition, P.R. of  China will accommodate the Phase of the Asian Countries of the “World FICTS Challenge 2010”, the International Circuit articulated in 14 stages that carried out in the 5 Continents. The “2nd Beijing International FICTS Festival” is organized by the BODA (Beijing Olympic City Development Promotion Association) of which is V. President the Prof. Jiang Xiaoyu, Member of the FICTS Permanent Commission of International Festival in collaboration with the China Central Newsreel and Documentary Film Study. The “Opening Ceremony” will taken place on 8th of August, day in which have been inaugurated the Olympic Games Beijing 2008, while the “Award Ceremony” will taken place on 14th of August. The location that will accommodate the event are different: the Beijing Film Academy, the Olympic Green Park, the University of Beijing will be the center of projections, meeting, seminaries, forum, etc.

The FICTS Vice President Mr Andrew Luwandagga, is the promoter and the organizer of the “4th Kampala International FICTS Festival” that will take place in the city center of Kampala (Uganda), from Aygust 10th to 12th. The Festival is directed by Dean Kiribige of the “Uganda Tennis Association”, in collaboration with the Uganda Olympic Committee, Sports Betting Africa (SBA) and Kampala City Council (KCC). The event, with free entrance for the audience, was opened to all television, movie and new media productions dealing with sport or having sport in all its main subject. The African Continent, that this year will host the “FIFA World Cup 2010”, has approached itself, to great steps, the spread of the cultural values and sports that are to the base of the FICTS mission. At the Opening and the Closing Ceremonies, will participate the Sport Minister On. Charles Bakkabulindi, Alex Kobia FICTS President for Africa and prestigious personages of African sport and journalism.

The city of Cholpan-Ata, situated on the northern river of the Issyk-Kul lake in Kirghizstan, will accommodate, from September 5th to 8th 2010, the “1st Kirgizia International FICTS Festival”. The event, that makes its debut in the International Circuit of the “World FICTS Challenge”, is organized by Nikolay Porokhovnik, Member of FICTS Permanent Commission of the International Festival in collaboration with the “Interstate Fund of CIS Countries” and the Government of the Republic of the Kirghizstan. The Festival will be articulated in projections, workshop, conventions, meeting, awards. There will be projected 39 videos in competition to the Festival that will concur to the award with the “Special Diploma” and of the “Memorable Special Prizes”. The Opening and the Award Ceremonies will have in programme the presence of famous directors and producers let alone of the winners of the summer and winter Olympic Games.

The “9th Tehran International FICTS Festival” will taken place from September 25th to 28th 2010 in Tehran (Iran). The event, under the motto “Sport, Media and Solidarity”, is organized by the “National Olympic & Paralympics Academy” in collaboration with the FICTS and the Ministry of the Sport and the Culture of Iran. The videos projected, selected by an International Jury, come from different Countries among which Iranian Nations, Asians, European and Americans. Mr Abdol Reza Savar is the President of the Festival and Coordinator of the Islamic Countries and Islamic Solidarity Games 2009 and Mr Mohammad Reza Mohammad is the Festival Secretary and Member of the FICTS International Festival Committee. Info: http://www.tehranficts.com/.

The city of Lipetsk (Russia) will accommodate, from 28th September to 1st October, the “7th Atlant International FICTS Festival”. The event, on the seventh edition, is organized by Nikolay Porokhovnik Member of FICTS Permanent Commission of the International Festival in collaboration with the Ministries of the Culture and the Sport of the Region of Lipetsk and from the Russian Olympic Committee. The Festival will be articulated in projections, workshop, conventions, meeting with the presence of the main television channels among which Channel One, the first channel in Russia. The Opening and Closing Ceremonies preview the presence of famous directors and producers let alone champions of the present and the past whom have gained summery and winter Olympic Games.

Liberec (Czech Republic) will accommodate – from 5th to 7th October – the “13th Liberec International FICTS Festival”. The Festival is organized by “Sports and Physical Training Organization of Liberec” in collaboration with the Minister of the Education, Czech Rep. Olympic Committee, City and region of Liberec. The Festival, presided by the President Milan Jirásek and by the V. President Ing Vladimír Boháè, is directed by Dr Pavel Landa. The event is articulated in projections, meetings, workshops among which that on titled “New media for sport document”.