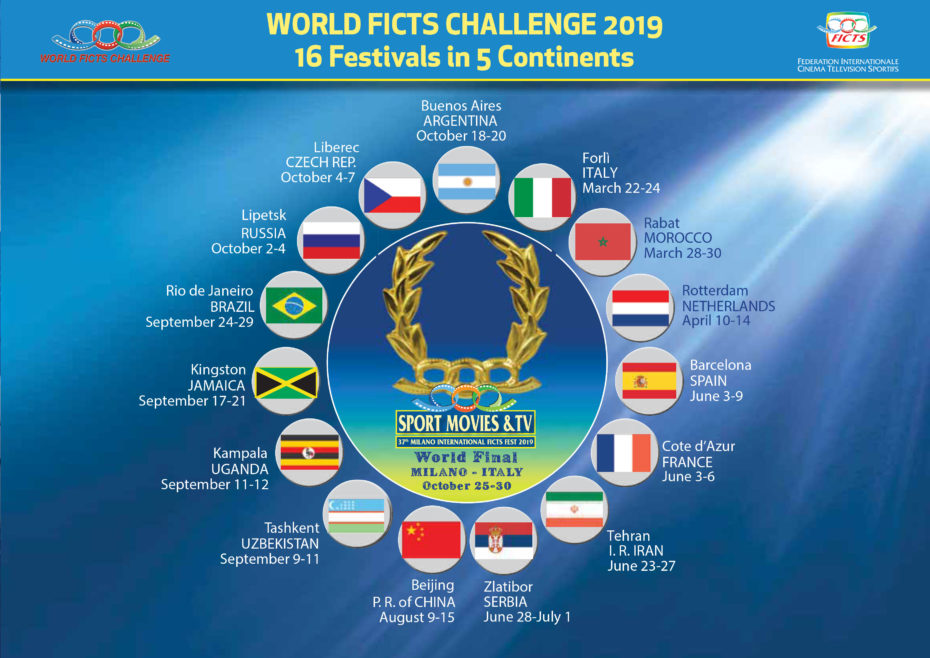 FICTS promotes and organizes every year freely, the Worldwide Championship of Sport, Cinema and Television “WORLD FICTS CHALLENGE” programmed in 16 Festivals in  five Continents. Winning productions of each Phases (maximum 15 / minimum 10 productions – see Art. 5 of the present Rules) will be automatically admitted to the Final Phase.

The General Assembly, on proposal of the FICTS Executive Committee, analyzes and approves the proposals of candidatures to “WORLD FICTS CHALLENGE” for the following year that will be carry on in the respect of FICTS Statute and Olympic Charter one. All the Phases will be held not later than September (different dates can be approved one by one by FICTS Board of Trustees only for specific reasons).

“World FICTS Challenge” is the main presentation where FICTS is used for the promotion and spread of Olympic values ​​and sport culture, a competition for movies and television productions from 5 Continents, scheduled in 16 phases including Worldwide Final. Through the “World FICTS Challenge”, Federation promotes all around the world, the quality of sports images and cooperation of those who work creatively in sports broadcasters and sport cinema.

FICTS supports producers and directors in authorization process of charges for the use of Olympic heritage through its collaboration with IOC Foundation for Culture and Olympic Heritage. FICTS provides for the Local Organizing Committees, 50 productions,  Short, Documentaries, Olympic videos and 7 Exhibitions, a strong promotional activities on the launch and promotion (emails sent directly to producers, directors, Olympic Committees, sport Federations with a mailing list of 65.000 contacts), possibility to consult the videos archives, advice and assistance to the organization, facilitation contacts with movie houses of production.

One of “World FICTS Challenge” objectives is to create accessible events including as many people as possible in the hosting Country, therefore all events are free of charge. While the hosting city or selected agencies themselves are organizing local events, FICTS assumes the overall project management  responsibility and coordination of the whole project “World FICTS Challenge” as well as the Final Phase, widely covered by international media.

The Festivals of the “World FICTS Challenge” are articulated into Screenings, Meetings, Workshops, Exhibitions, Sides Events and Awards.

The events are a valuable promotion tools of educational values and training that sport expresses and qualified international spot for the hosting cities and their Countries through media, broadcasters, global networks, new media, productions companies, producers, directors, Olympic Committees and Sport Federations, sports champions, radios, advertising and communication agencies that illustrate the world of sport cinema and TV  through documentaries, spot, fiction, cartoons, etc. The high potential visibility is developed by communication actions joined with the event and characterized by the use of new technologies with Networks presence from all over the world such as protagonists of the event referred to by a large number of sport television channels, digital and analogical (selected among the 1.725 operating in 5 the Continents).

The Phases of the “World FICTS Challenge 2019” are: 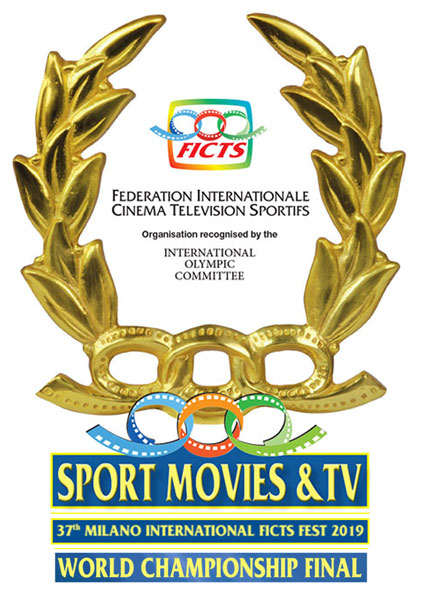