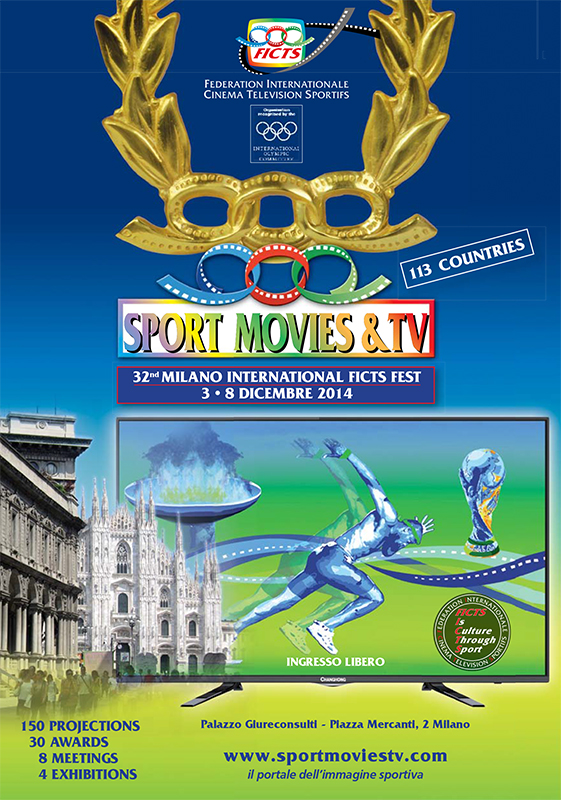 A gratifying balance, interesting results above all for the stand out event internationality, completed by a wide participation on national scale, a critic and audience success (crowded theatre and high audience index) and from an excellent participating productions quality from 5 Continents. These elements characterized the event (considerable international showcase for media, TV Channels, worldwide networks, radio, Movie Studios productions, producers, movie directors, Olympic Committee and sports Federations, sport champions, advertisement and communication agencies) presented to the audience, with free entry, 1000 champions on screen, with 150 Projections chosen among 958 reached from 55 Nations of 50 Sport Disciplines with 25 European and Worldwide Previews and 30 hours of exclusive Olympics images, 8 Meetings, 4 Conventions, 2 Workshops, 5 Exhibitions, 2 Press Conferences, 30 Award Deliveries, 4 Side Events. 85 Houses of productions and 94 TV Networks have inaugurated 2014 edition through documentaries, reportages, TV adverts, fictions, cartoons, for a total of 129 hours divided in 7 sections. Palazzo Giureconsulti – in Milano centre (Piazzza Duomo)- Festival “core business”, has been the theatre (every day from 3.30 pm to 10.30 pm) of the work projections in contest for 5 days in 6 different spots simultaneously.

December 5th 2014, at Sala Parlamentino of Palazzo Giureconsulti, has occurred the 32nd FICTS General Assembly, where the representatives of the 113 Countries Member have attended the Meeting. Prof. Franco Ascani, FICTS President, showed the Board of Directors “Report” to representatives of FICTS International Commission, with the Federation objectives and lines action from a political-organizational point of view for the next years 2015-2016. At the end it has been presented, from Organizers of each Phase, the 15 Festivals of “World FICTS Challenge 2015” in 5 Continents, that will constitute an approach to EXPO 2015. Kazan (Rep. Tatarstan – Russia) will host the most prestigious event in the International Circuit 2015. Candidatures and dates will be identified in next FICTS Executive Committee meeting.

Sala Parlamentino of Palazzo Giureconsulti in Piazza Mercanti 2, has been the scenario of 8 Conventions and 2 Workshops that have enriched “Sport Movies & TV 2014”. “EXSPORT: Sport, Culture, Tourism for All” Meeting with the presentation of 340 events and several sport, touristic and cultural initiatives for EXPO 2015 aimed to promote Lombardy territory attractions has been concluded by Chamber of Commerce President Mr. Carlo Sangalli that, underlying the importance of international events in sight of the great appointment of 2015, sustained that young occupation must become the recovery emblem. After the events presentation it has been subscribed the Convention between FICTS and “National Observatory bullying and doping” by FICTS President Franco Ascani and the Observatory Honorary President Gen. Franco Gola and General Secretary Dr Luca Massaccesi.

Friday December 5th took place the 3rd Board of Directors Meeting of FISpT – Federation International Sport pour Tous coordinated by Mr Isa M.Abdul Rahim (Bahrain) during it has been presented 2015 scheduled activities as “One week all sports” that will start in the end of April in Athens and Milan.

In “Expo of citizens: performances and meetings” by Hector Vilanueva, “Sport Movies & TV” assisted to the dialogue and integration between different cultures through poetry, art, music and dance in many styles and expressions.

Palazzo Giureconsulti, “core business” of the Festival, hosted other than projections, meetings and Workshops – 5 Exhibitions (open to audience with free entry) that registered a considerable flow from sport passionate. From China “Winter sport in Beijing”, the original and exclusive Exhibition with pictures and Beijing sport culture, hosting city of the Olympic Games in 2008 and candidate city to host Winter Olympic Games 2022 with unstopped projection of Chinese sport movies. Exhibition has been inaugurated by Mr Jiang Xiaoyu V. President of BODA (Beijing Olympic City Development Association). It has started the approach to EXPO 2015 in range of “EXSPORT: Culture, Sport Tourism for All”.

Other Exhibitions assembled in the range of “Sport Movies & TV 2014” at Palazzo Giureconsulti:

· “State of Grace” realized by IOC with excellent and qualified images, pictures or TV that, thanks to the technological progress, made sport events extremely popular.

· “The female emancipation through the Olympic Games”: 30 panels in order to illustrate the pain, perseverance, passion, commitment and rebellion regarding rules that women fought and won realized by Panathlon International.

· “Ayrton Senna Forever”: in memory – through pictures and memorabilia- twenty years after the passing of Brazilian pilot by FICTS Italia A.s.d

Opening Ceremony – at Auditorium Testori, Palazzo Lombardia – has been opened by Antonio Rossi, Olympics medal and now Sport Council Member for Lombardy Region. IOC President Dr Thomas Bach sent a warm video-message in which he thanks FICTS and its 113 Countries Members for “the constant support and strong commitment to promote Olympic Games and its values as well as the active participation from FICTS President Mr. Franco Ascani in IOC projects especially the ones regarding “Olympic Agenda 2020”. President Bach underlined the goal reached by Italian National Olympic Committee, with his 100 years anniversary. In range of “Sport Movies & Tv 2014”, it took place the first digital version of “La Grande Olimpiade”, “Olympic” master chief by Romolo Marcellini, official movie of Olympic Games Roma 1960, restored in 4K by IOC with the attendance of Dr Roberto Fabbricini, General Secretary of Italian National Olympic Committee and Luciano Buonfiglio, Italian National Olympic Committee Vice President.

FICTS President Prof. Franco Ascani delivered to Lorenzo Dallari, SKY SPORT ITALIA Vice President, the “TV SPORT EMOTIONS Award – The best TV sport channel of the world 2014” for the winning network delivered in past editions to EUROSPORT (France) in 2012 and CCTV (China) in 2013.

Success in term of participation for the International Workshop “New International Sport Movies Television Market Trends” a moment of cultural-professional debate and reflection between TV Networks, Producers, Directors, Journalists and Sector Operators, on the developments, tendencies of TV, Web and mobile to the presence of TV, sport and media personalities.

Attended to the workshop, Marcel Vulpis FICTS Account Manager for sponsor companies for the International Federal activities and Lucia Milazzotto Commercial Director EMEA & India WCPMedia Services. Great adhesions to “One to One Meeting” as well with Movie Directors and Producers. Based on other ten “New International Sport Movies Television Market Trends” Workshops occurred in “World FICTS Challenge” Festival seats in 2014, Prof. Franco Ascani confirmed to the Workshop the will to institute a “Permanent Forum” dedicated to the sector with TV operators, main actors of Sport broadcasting beyond FICTS Commission members “Market Television and Movies Rights”. During the Workshop, Prof. Franco Ascani presented some of the operational proposals for “Olympic Agenda 2020”, among: the creation of a virtual lab (without a physical seat) of audiovisual contents at disposal of talented youth that will operate as a creativity incubator for sports images and FICTS collaboration for the fulfillment of “Olympic Television Channel” through the availability of audiovisuals contents for the Channel selected from FICTS Archive as well as the interactive promotion at international level at more than 9.000 members. FICTS will constantly update -freely- all the components through weekly Informational Agency “SPM & TV” open to the participation of sector operators.

PRESTIGIOUS LOCATIONS FOR AN INTERNATIONAL EVENT

Two prestigious locations hosted “Sport Movies & Tv 2014”.  Testori Auditorium from Palazzo Lombardia has been the seat, December 4th and 8th, of Opening and Award Ceremonies with the delivery of “Guirlande d’Honneur”, “Mention d’Honneur” and “Special Awards” “Sport Movies & TV” winners. Opening ceremony (with Carabinieri band that played “Chariots of fire” and the Italian National anthem) and Award Ceremony (with Military Band from Teuliè school) have been opened by dance performance by Carol Alberio (Italian National Dance Federation from Milan) and from Capoeira performances by “Capoeira sul da Bahia – Milano”.

During the Ceremony they have been awarded the top 100 protagonists of Lombardy Schools that have participated to “Trofei di Milano 2014 – 5 Cerchi per EXSPORT”.

ON RAI SPORT TV FOR 5 DAYS…AND BEYOND

“Sport Movies & Tv 2014” was protagonist for 5 days on RAI Sport Television a channel completely dedicated to sport. A daily program of 20 minutes in which, in addition to the most beautiful footages of the videos in competition and the highlights of the event were broadcast interviews with sport personalities, movies, television, filmmakers and international producers to the operators present. Live tv, radio and television services, Ceremonies live broadcasted in streaming on the FICTS website www.ficts.com and articles both online and on newspaper.

Changhong Electric was Technical partner of FICTS during “Sport Movies & Tv 2014” during which was present, along with 15 televisions “Smart TV” WCG (Wide Color Gamut), also with the area “Changhong Smart Home”. The brand is the number one manufacturer in China to manufacture televisions, consumer electronics, basic components. In over sixty years, Changhong has won the trust of millions of customers around the world. Changhong Televisions in Europe are produced at the new site in the Czech Republic in order to ensure quality, service and ultra-fast delivery