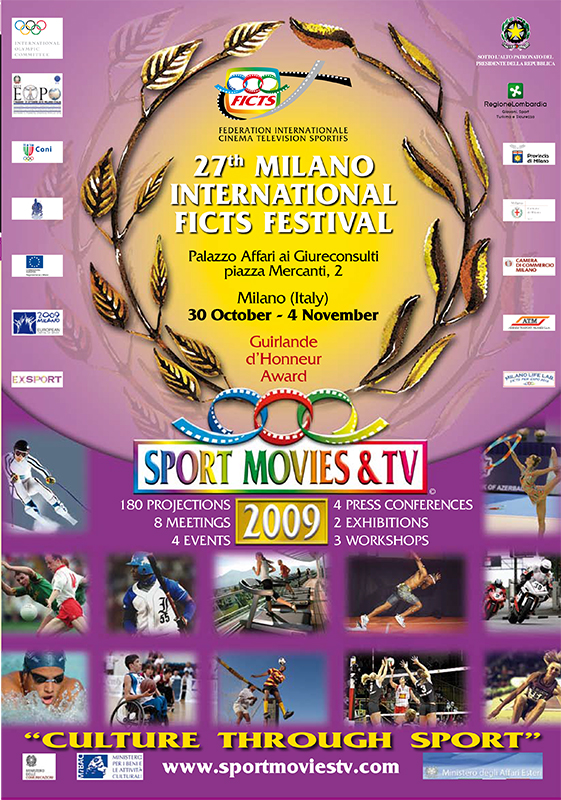 “Sport Movies & Tv 2009 – 27th Milano International FICTS Festival”, international event dedicated to the cinema and sport television, World-wide Final of the 14 stages of the International Circuit of “World FICTS Challenge (WFC)” that carried out in the 5 Continents, has taken place from October 30th to November 4th, with free entrance, to Milan.

A “PREMIERE” FOR THE OPENING CEREMONY

Italy has been chosen among the 205  IOC Member Nations to introduce the “absolute world preview”. “The Everlasting Flame: Beijing Olympics 2008”, the Beijing Olympic Games 2008 Official Movie (that has recorded a great success of public), introduced by Prof. Philippe Blanchard (IOC) and by the director Gu Jun, was opened the Festival on October 30th. The Governor of the Region Lombardia On. Roberto Formigoni has open, to the Skyscraper Pirelli, “Sport Movies & Tv 2009” at the presence of the highest Institutional (Region, Province and Municipality) and sports (IOC, NOC) Authorities. Prestigious hosts of the sport world (30 Olympic gold medals led by Edoardo Mangiarotti), cinematographic and journalistic (www.sportmoviestv.com) were awarded with the “Excellence Guirlande d’Honneur” among which, Dr He Zhenliang Honorary President of the Chinese Olympic Committee, Bruno Vespa, Italian journalist and writer, Luciano Barra, international sport director, Ottavio Missoni stylist and Olympic champion at the London Olympic Games of 1948, Livio Berruti, Olympic champion of athletics, Francesco Ricci Bitti International Tennis Federation President, Dick Fosbury WOA President…continue.

During the evening the FICTS President Prof. Franco Ascani, has been awarded – by the Greek artist and painter Mina Papatheodorou-Valyraki with the “USSA Award”, the prestigious acknowledgment assigned by the “United States Academy Sport” presided by Dr Thomas Rosandich.

A flattering result, a great participation on a national and international scale, an excellent quality of the works in competition and meaningful perspectives for the future. These are the elements that have characterized the 27th edition of “Sport Movies & Tv” with the motto “Culture through sport”. The event, international showcase for media, television broadcastings, world-wide Networks, radio, houses of production, major producers, directors, filmmakers, Olympic Committees and Sports Federations, sport champions, advertising and integrated communication agencies has offered to the audience 1000 champions on the screen, 180 Projections (selected among 986 works), coming from 55 Countries that have had as object 50 sport disciplines, 7 points of projection, 7 Meeting, 8 Encounters, 3 Workshops, 2 Exhibitions, 9 Side Events, 4 Press Conferences and 30 Awards. “There’s no sport without tv, there’s no tv without sport” is the main topic of “Sport Movies & Tv 2009” that, in view of EXPO 2015, will show the universality of the cinema, television and sport.

Three have been the location that have hosted “Sport Movies & Tv 2009”. The “Pirelli Skyscraper” (http://sportmoviestv.net/grattacielopirelli), center of the Regione Lombardia, let alone one of the most famous building and symbol of Milano with its 127 height meters, has accommodate the “Opening Ceremony” of the Festival to the “Auditorium Gaber”. Palazzo Giureconsulti (Piazza Mercanti, 2), historical sixteenth-century building (www.sportmoviestv.com/palazzogiureconsulti), has accommodate the “core business” of the Festival with Projections, Meetings, Workshops, Exhibitions, Side events. The Sala Alessi, in the prestigious location of Palazzo Marino (Piazza Scala, 2) (http://sportmoviestv.net/palazzomarino) seat of the civic administration just in front of the famous theatre, has host the “Awards Ceremony” and the delivery of the “Guirlande d’Honneur”, to the winners of “Sport Movies & Tv”.

The Palazzo Giureconsulti has been theatre (every day from the 3.30 p.m. to the 10,30 p.m.) of the projections of the works in competition in 5 points of projection at the same time. There were present 80 Houses of Production, the Network and the Television that have given life to edition 2009 through documentary, reportage, spot, fiction, for a total of 200 hours divided in 6 sections: Olympic Games, Documentary, Transmissions and New Technologies, Sport & Society, Movies, Sport Adverts. “First preview” to “Sport Movies & Tv 2009” for two productions about football. “Milano and soccer: from the rebirth to “Milano da bere” produced by the “Good Day Films” (Italy) on soccer and the soccer in Milan to the presence of the “old glories” of A.C. Milan (Franco Baresi) and Inter and of the City council member to the Sport of the Municipality of Milano Dott. Alan Rizzi and “Second half”: the “psychology of the organized supported” and the faces of the violence in the stadium… continue.

On the occasion of “Sport Movies & Tv 2009” there were (to Palazzo Giureconsulti with free entrance) two exhibitions that have recorded a great crowd of passionate. The Loggias of the and the Hall Torre were host “Blue print: the sign of volleyball” (take a look the images) while the Exhibition Hall was shown “Preview Museum of sport of Milano” (take a look the images). A series of pictures which retrace the history of the Italian National Teams of volleyball and its champions, the greatest trophies of European soccer (Champions League, Uefa Cup, etc.) conquered by A.C. Milan and F.C. Inter, the Champions of Italy `81- `82 of the Olympia Milano basket, the portrait of the unforgettable Captain of the Inter Giacinto Facchetti, a series of images on the history of the national Italians of volley, are only some of the rarities in show.

THE MEETINGS AND THE WORKSHOPS

10 Meetings and 3 Workshop in the Parlamentino Hall of the Palazzo Giureconsulti has enriched the program of “Sport Movies & Tv 2009”. The Workshop Movies Market & Tv – Sport, Cinema, Tv and Enterprise” for assigned to the intense activities, will analyze pictures and TV rights in the production of sports event. Reflectors directed also on “EXPO 2015” and in particular on the “GENERAL STATES of the Sport for the EXPO”: to come down in field the values of the sport with “MILAN LIFE LAB – FICTS FOR EXPO”, opportunity in order to share the ideas and in order to transform EXPO in “EXSPORT”. The FICTS has been designated to being the operating fulcrum in order to realize the different several phases of the program through the spread of a culture of “Life’s healthy style through the sport” with the initiatives of social useful.

Meeting: “1978-2010, Thirty years of volleyball in television. The evolution of  a sport emotion’s narration” on the evolution of the  filming techniques and comment of volleyball, from the first edition of the World Games played in Italy in 1978 to now to the presence of Andrea Zorzi (Champion of the World of volley 1990 and 1994). The presentation eeting: “Trophies of Milano 2010 – More sport with the young” presentation of the Interschool Championship of Athletics and Educational Activities, for reply and consents in the Italian panorama of the “Sport for All”.

During the Festival, the FICTS President Prof. Franco Ascani and Dr. Enrico Prandi, President of the Panathlon International, has undersigned, to the center of the Festival, a Protocol of Understanding with the objective primary to realize actions for the development of Ethics and of the Values of the Sport.

The Award Ceremony, has taken place in the Alessi Hall, in the special frame of Marino Palace, were have been awarded the winners with the “Guirlande d’Honneur”, “Mention d’Honneur” and “Special Awards”. The President of the Council of the City Hall of Milan Dr. Manfredi Palmeri has opened the Ceremony to the presence of the Assessor of the Sport of the City of Milan Dr. Alan Rizzi and the international guests (Yana Batirshina, Dick Fosbury, Evgeny Bogatyrev, Muge Bayraktar, Nguyen Thanh Lam) and some of the protagonists of the works in competition (Dario Ballantini, Enrico Beruschi, Marcello Cuttitta).

The winner of the 27th edition of “Sport Movies & Tv” is the Official movie of the Beijing Olympic Games “The Everlasting Flame: Beijing Olympics 2008” (CCTV – China Central Television – China) which gained the “Excellence Award 2009”. Mrs Franca and Alessandro Cannavò, son of the memorable Director of Italian newspaper “Gazzetta dello sport”, have given the “Candido Cannavò Trophy for the Olympic Spirit” to the movie director Gu Jun and to the General Director of CCTV Dr. Guo Benming.

Great presence of the public at the Award Ceremony, where are delivered the “Guirlande d’Honneur”, the “Mention d’Honneur” and the “Special Awards” to…continue.

All the Pictures of the “Sport Movies & Tv 2009” divided for each event, are available on www.sportmoviestv.com/photogallery.asp.

The Official Catalogue (96 pages) with published synopsises, pictures, timetables and day of projection is on-line on http://sportmoviestv.net/download/Catalogo.pdf.

LIVE IN TELEVISION AND ON THE WEB

Live in television and streaming video on the website. “Sport Movies & Tv 2009” has been protagonist to Italian news “Rainews24” with daily connections for all the duration of the Festival. The two special dedicated to the Opening and Award Ceremonies during the programme “Additional Times”, cured by Paul Pacitti where was present the FICTS President Prof. Franco Ascani. “Sport Movies & Tv 2009” will be live broadcast on the theme channels T&F Channel Tv www.trackandfieldchannel.tv and Golf Channel One Tv www.golfchannelone.tv. The two channels, directed by Genny Di Napoli, have transmitted in broadcast also the Opening and Award Ceremonies let alone the main appointment of the event.