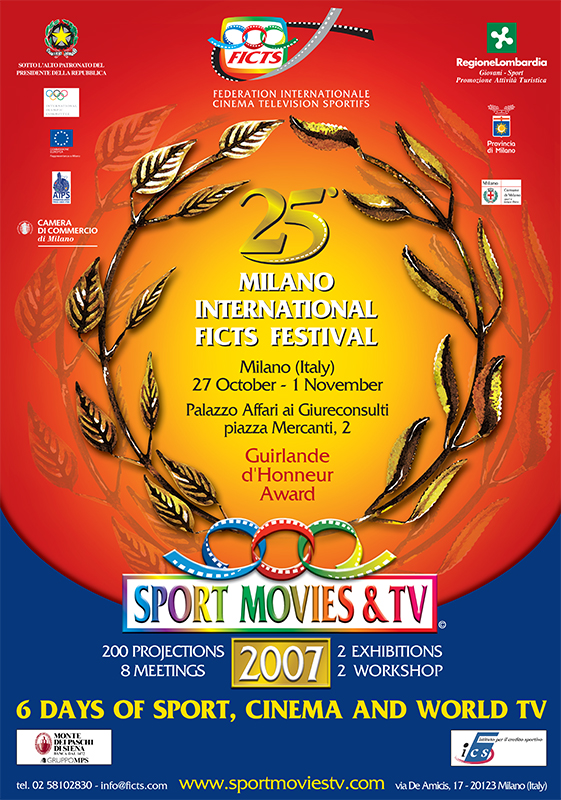 At the Quadrennial General Assembly of the FICTS (Fédération Internationale Cinéma Télévision Sportifs), on the 28th of October in Milan, Prof. Franco B. Ascani was re-elected, by a unanimous decision, President of the Federation for the next four-year period. Deputy Presidents, the Uzbek Sabir Ruziev and the Ugandan Andrew Luwandagga; General Secretary, Massimo Lavena. On the web site is published the list of the members of the Board of Trustees and those of the three Federal Commissions.

“Sport Movies & Tv 2007 – 25th Milano International FICTS Festival” is the most important International Festival dedicated to sport cinema and television, Final Phase of the “World Ficts Challenge 2007” (12 phases in 5 Continents). It has registered a great success of public and has been inaugurated by the French actor Philippe Leroy, at the presence of numerous personalities of the Sport, among whom 30 Gold Olympic Medals. 150 Producers and 98 Directors have attended the Festival. 150 the Projections of the 52 sports disciplines from 45 Nations, 8 the Conventions, 2 the Workshops, 2 the Extensions, 5 the Connect Events, 4 the Presentations of books and 30 the Awards. More than 1000 champions on the screen (www.sportmoviestv.com).

THE PERSONALITIES OF THE YEAR

Prestigious guests from the world of sport, cinema and journalism have been present at the 25th  edition of the“Sport Movies & Tv 2007”. The event has been attended by: Philippe Leroy (“Guirlande d’Honneur to the career), the famous French actor who’s fond of parachuting and who has been Champion with the French National of rugby, Yelena Isinbayeva , holder of the world pole vault record and Olympic champion and “Guirlande d’Honneur” as “personality of the year”, Massimo De Luca (“Guirlande d’Honneur”) sport journalist Editor of Raisport. Standing ovation for the HRH Principe Faisal Al Hussein of Jordan,  awarded with the “Special Award” for the video “Peace through sport” wich,  with its strong message of peace, has won “Sport Movies & Tv 2007”.

THE IOC AND THE OTAB

“Sport Movies & Tv 2007” has been opened by the greeting message of the President of the International Olympic Committee (IOC) Jacques Rogge, at the FICTS as partner of the CIO, for its fondness and high professionality. To represent the IOC have attended the Festival: Ottavio Cinquanta Member of the Executive Committee, Francesco Ricci Bitti President of the International Tennis Federation, Bruno Grandi President of the Federation International of Gymnastic and Gianni Merlo President of the AIPS (International Press Association Sports). The greeting message of the CISM President (Comitato Internazionale Sport Militare) General Gianni Gola has arised great interess during the Opening Ceremony . On the day dedicated to the “World FICTS Challenge”, Doct. David Herren has shown, through multimedial images, the activities of the Information and Management Department of IOC, directed by Philippe Blanchard, instead Arnold Ross, has presented the OTAB, the sports movie and televisions library which reports the Olympic Games history of all the times. The OTAB during the Festival set up an exposure place in the sala Torre in Palazzo Giureconsulti.

“Sport Movies & Tv 2007 – The 25th Milano International FICTS Festival”, organized by the FICTS (Fédération Internationale Cinéma Télévision Sportifs, recognized by the IOC – International Olympic Committee) associated with 102 Countries, has been held under the “High Patronage of the President of the Italian Republic”, in collaboration with the Regione Lombardia – the Patronage of the IOC – Information Management Department, NOC (National Olympic Committee), Common Sport Council and the Province of Milan, the European Commission, the Chamber of Commerce of Milan. The Partners of the event are: Istituto per il Credito Sportivo, Milano-Bicocca University, Panathlon, Amova. Media Partners are: AIPS (International Sports Press Association), the daily sport magazine Gazzetta dello Sport, Datasport, Sportlife and ATM.