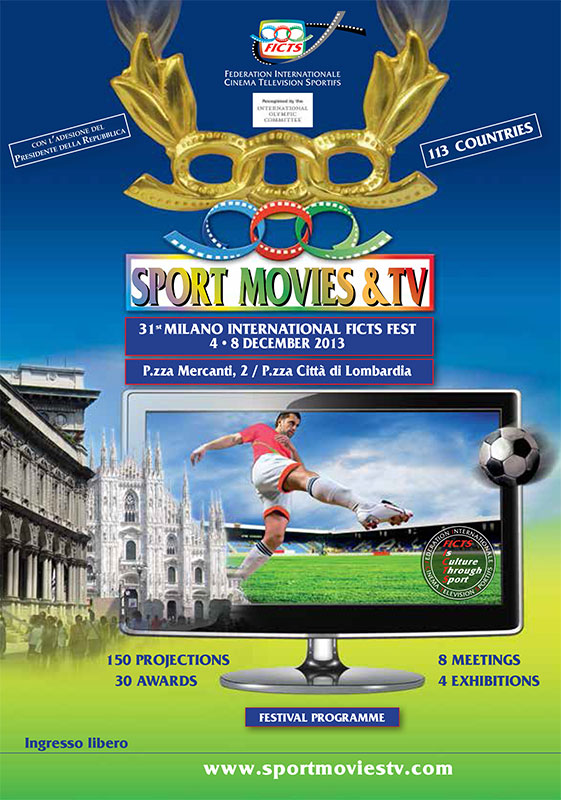 On 5th December 2013, at Sala Parlamentino of Palazzo Giureconsulti, took place the meeting of the 31st FICTS General  Assembly, to which took part the representatives of the 113 member Countries of the Federation. During the work sit was approved, by a unanimous decision, the Executive Project in order to organise, for EXPO 2015, “EXSPORT – MILANO WORLDWIDE FICTS FESTIVAL” Worldwide Championship of Cinema and Sport Television 2015 (given to Milan on 8th August 2011 during the Board of Trustees reunion in Beijing) in order to promote and spread the values of the sports movement and of culture through sport.

The BODA Delegation of Beijing gave the “World” flags to the EXSPORT 2015 Organising Committee.

After the Ceremony there were presented the 15 Festival 2014 in 5 Continents, by the Organisers of each phase, which will be the approaching road to EXPO 2015. President Prof. Franco Ascani presented the “Report to the FICTS Board of Trustees and Committees Members”, the FICTS objectives and the line actions on the political and organising side 2014-2015.

A flattering balance, interesting results especially from the point of view of the International nature of the event, completed with broad participation on a national scale, a critical success and audience, (crowded rooms and high audience) and an excellent quality of the works coming from the 5 Continents. These are the elements that have characterized the event (international showcase for media, broadcasters, World networks, radio, production companies, producers, directors, Olympic Committees and Sports Federations, sports champions, advertising agencies and communication) which presented 1000 champions on screen, 150 Projections of 50 Sports Disciplines, 7 Meeting, 4 Meetings, 2 Workshops, 4 Exhibitions, 2 Press Conferences, 4 Side Events, 30 Awards. 70 Companies and 92 Television Networks characterised the 2013 edition through documentaries, reportage, tv ads, fiction, cartoon, etc. for a total of 139 hours in 7 sections. The sixteenth-Century Palazzo Giureconsulti – in the center of Milano (Piazza Duomo) – “core business” of the Festival, was the scene (every day from 3.30 pm to 10.30 pm) of the projection of the works in competition for 5 day in 6 points of projections at the same time.

The “Opening Ceremony” – at Auditorium Testori of “Palazzo Lombardia” – was dedicated to Ottavio Missoni (present the wife Rosita and the daughter Angela) world fashion designer brand, man of sport, “a myth on track”, competitor in the Olympics for track and field and finalist at London 1948, Honorary President of the “Sport Movies & Tv” Jury and “FICTS standard bearer”. The Ceremony, opened by the Medallist Antonio Rossi Sport Minister of Region Lombardia and by the message of the new President of the International Olympic Committee Thomas Bach, included the delivery  of the award to the best students of “Trofei di Milano 2013” among the 41.000 participants awarded by the Granarolo President Dr Gianpiero Calzolari and ended by a tribute to Giuseppe Verdi on the 200° anniversary of the birth of the Italian musician and with the presentation of the costume of “La Traviata” by Zeffirelli.

Among the many guest, for reasons of space, we only mention some. Dott. Francesco Paolo Tronca Prefect of Milano, Giovanni Malagò CONI President, Francesco Ricci Bitti President of ASOIF (Association of Summer Olympic International Federations), Hristo Stoičkov Golden Ball 1994, former soccer player of Barcelona and of the Bulgarian National team, Vincent Candela World Champion France 1998, Laura Milani and Elisabetta Sancassani, rowing golden medal in the world championship 2013 in Chungju (South Korea), Francesco Moser for the 30 years from his world hour record on track, Bud Greenspan (“in memory”) director of the Official Olympic Games film for 6 editions (his nephew attended the event), Massimiliano Miletti President of the Association “Kid’s of Kosovo”, Hugh Laurie British actor, writer, famous protagonist of the tv series “Dr. House – Medical Division” busy in New York, he sent an effective video with the thanks for the award he received.

To the “Award Ceremony” (streaming live on www.ficts.com) were awarded with the “Excellence Guirlande d’Honneur”: Marco Patrignani President and founder of Orchestra Italiana del Cinema e Martina Caironi gold medal on 100 m at the Paralympics in London 2012, world record holder in 100m and long jump (category T42 with a measure of 4.25) and keen on cinema.

Match”, film produced by Rekun Cinema (Russia) and directed by Andrey Malyukov, great European preview (the first on among the 72 in competition) officially started “Sport Movies & Tv 2013”. At the evening of 3rd December, guided by the journalist and writer Gianni Mura, took part the producers Ilya Neretin and Dmitriy Kulikov who presented, to the media and the presents, the movie inspired by a true story happened in 1942 in Ukraine where it was played a soccer match between a local selection and a Nazis representation, in which it is defined the “Death Match”. The film, with the editing of the Italian Oscar-winning Gabriella Cristiani, combines the themes of war with a look on Kiev before and after the conflicts of the Second World War and the massacre of the Jews of Babij Yar, with lighter as the love story between the protagonist, the goalkeeper Mykola Trusevych (played by Sergei Bezrukov) and Anna (Elizaveta Boyarskaya, already seen in “the Fall – the Last Days of Hitler”).

Sala Parlamentino of Palazzo Giureconsulti in Piazza Duomo was the scene of the Workshops and the Meetings that enriched the “Sport Movies & Tv 2013” programme. The International Workshop “La FICTS nel mondo: WFC – CIO” with the presentation of  “Olympic Short Film Contest”, of the “Olympic Museums Network FICTS Challenge” and of the 14 Festivals of “World FICTS Challenge 2014”.

The Meetings: “Exsport: culture, sport, tourism for all” about the project “EXSPORT”, approved by the Thematic Tables Expo Milano 2015 by Chamber of Commerce, according with the Institutions, which will work – from 1° January 2014 to 30 October 2015 – as center of national and international attraction for Milan, Lombardia, the citizens and the guests of EXPO 2015. “W la fuga” happening with Paolo Condò and Marco Pastonesi. “The Palalido”, produced by Raisport about the historical sports facility in Milan with the participation of the Olimpia champions of present and past. “Solidarietà, integrazione e associazioni etniche” with the participation of the representatives of the Etchic Communities of “Forum Città Mondo” and the representatives of the Comune di Milano Culture Ministry. “Fighters”, an evening dedicated to the Italian pro boxing: negative and positive aspects of the movement, media appeal and media and critical issues concerning the relationship between boxing and tv with the presentation of the movie by Daniele Azzola together with the Lega Pro President together with journalists, athletes and the scriptwriter and author of the book “La boxe immaginata al cinema”.

The “Tv Sport Emotions Award 2013” as  the “Best Television Channels of the Year” was given to CCTV Cinema (China Central Television State Chinese Television). The award was given to Zhao Dongming.

Successful participation in the International Workshop “New Sport Movies and television market trends” moment of cultural professional encounter and reflection among Broadcasters, Producers, Directors, Distributors, and Operators Sector Journalists, developments and future trends in the TV sector, the Internet and mobile platforms in the presence of celebrities from the world of television, sports and media. Great success also for the meeting “One to One” with present Directors and Producers. On the basis of the ten Workshops “New International sport television market trends” held in as many seats of the “World FICTS Challenge” organised by FICTS in 2013, the President Prof. Franco Ascani (see Relation www.fictsfederation.it/markettrends_2013.pdf) confirmed at the Workshop and to the Press the creation of a “stable Forum” dedicated to the market of sports television rights for the experts, the main actors of sports broadcasting besides the members of the FICTS Commission “Market Television and Movies Rights”. The Forum will join together periodically on the occasion of each of the 14 phases of the “World FICTS Challenge”. FICTS will keep constantly informed  – for free – all the members through the weekly Information Agency “SPM & TV” opened to the participation of all the workers of the sector.

PRESTIGEOUS LOCATIONS FOR THE INTERNATIONAL EVENT

Two locations hosted “Sport Movies & TV 2013”. Auditorium Testori of Palazzo della Regione Lombardia (Piazza Lombardia – Milano), was the seat of the “Opening Ceremony” Wendsday 4th December and Sunday 8th December of the “Award Ceremony” with the delivery of the “Guirlande d’Honnuer”, of the “Mention d’Honneur” and of the “Special Awards” to the winners of “Sport Movies & Tv”. Palazzo Giureconsulti was the “core business” (5-6-7-8 december) of the Festival with Projections, Meetings, Workshops, Exhibitions and Side Events.

Palazzo Giureconsulti “core business” of the Festival hosted – beyond projections, meetings and workshops – 4 Exhibitions (opened to public with free entrance) registered a great turnout by fans and curious. “Sport in China, in Beijing” was the original and innovative Exhibition of the famous Chinese photographer Tang Hui’s photos and of the images of sports culture of Beijing, seat of the magnificent Olympic Games 2008, organised by BODA (Beijing Olympic City Development Association) with the continuous projection iof Chinese sports films in 6 points of projection at the same time on the occasion of the “Beijing Day”. The Exhibition was opened by the FICTS President Prof. Franco Ascani and by the former Beijing Vice Mayor Mr. Liu Jingmin current BODA leader at the presence of 50 foreign Delegations at the Festival. That’s the way it began the approaching road to EXPO 2015 in the Project “EXSPORT Culture, Sport, Tourism for all”.

All the Photos about “Sport Movies & Tv 2013 – 31st Milano International FICTS Fest” divided for each event, are available on http://sportmoviestv.net/photogallery  and can be reproduced by agencies, newspapers, internet websites and it is compulsory to quote the source “sportmoviestv.com”, it is expressly prohibited to use them for commercial purposes and / or for-profit.