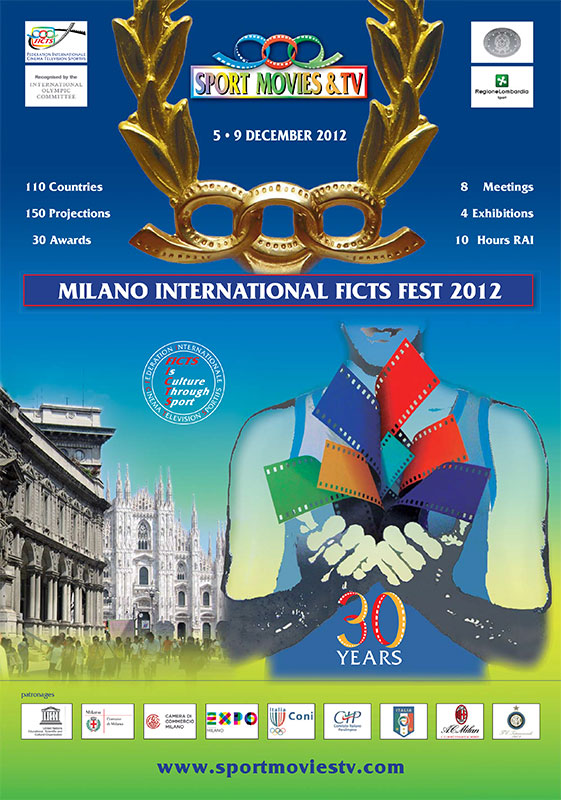 113 COUNTRIES FOR THIRTY YEARS OF FICTS: ALL THE FESTIVAL ON WEB

“CULTURE THROUGH SPORT”: 113 COUNTRIES IN COMPETITION FOR 30 YEARS

After the great success of the “30th World FICTS Challenge – Beijing Worldwide Final of Championship of Cinema and Television Sport” organized by BODA (Beijing Olympic City Development Association) in Beijing (P. R. of China), Milano has celebrated – from 5 to 9 December (with free entrance for the audience) – the “Thirty Years of FICTS Foundation” the Worldwide Championship dedicated to Television, Cinema, Communication and Sport Culture, at the end of the International Circuit articulated in 14 Phases around the 5 Continents. The Festival – under the motto “FICTS Is Culture Through Sport” – was organized by FICTS (Fédération Internationale Cinéma Télévision Sportifs, joined with 113 Members Countries) recognized by International Olympic Games. The Federation is presided by Prof. Franco Ascani Member of IOC Commission for “Culture and Olympic Education”.

A flattering result, interesting results above all about the in great participation on international character of the event, completed with a wide participation on national scale, a success of critic and audience with an excellent quality of the works in competition coming from the 5 Continents. These are the elements that have characterized the 30th edition of “Sport Movies & Tv”. The event, international showcase for media, television broadcastings, worldwide Networks, radios, houses of production, major producers, directors, filmmakers, Olympic Committees and Sports Federations, sport champions, advertising and integrated communication agencies has offered to the audience 1000 champions on the screen, 158 Projections (selected among 968 works coming from 55 Countries that have had as object 55 sports disciplines), 11 Meeting, 2 Workshops, 3 Exhibitions, 4 Side Events, 2 Press Conferences and 30 Awards. Palazzo Giureconsulti – “core business” of the Festival – was the scene (every day from 3.30 p.m. to 10.30 p.m.) of the projection of the works at 5 places at the same time. 97 Houses of Production and 62 Networks and the Televisions gave life to the 2012 edition through documentaries, reportages, adverts, fictions, cartoons, etc. for a total of 130 hours of projection divided into 7 sections.

The “Opening Ceremony” (video available in the homepage of FICTS website www.sportmoviestv.com) at the “Auditorium of “Palazzo Lombardia” opened by the greetings of Filippo Grassia Assessor of Sport and Youth of Region Lombardy and closed with the awards of 100 young people of the “Trofei di Milano”. The protagonists together with the Antoine de Navacelle de Coubertin (great nephew of the founder of the modern Olympic movement Baron Pierre de Coubertin) were: Carlos Nuzman President of the Organizing Committee of the Olympic Games Rio 2016, Giampiero Boniperti Honorary President of Juventus Football Club, Max Biaggi Worldwide Champion of motorcycling and Javier Zanetti the “captain” of FC Internazionale awarded with the “Excellence Guirlande d’Honneur” the highest honor of the Federation designed by Silvio Cazzaniga sculptor of the FIFA World Cup. Francesco Ricci Bitti IOC Member and President of ITF (International Tennis Federation), the 2012 London Olympic Games gold medals Arianna Errigo, Ilaria Salvatori Andrea Cassarà, Andrea Baldini, Giorgio Avola, Valerio Aspromonte with the President of Italian Fencing Federation Giorgio Scarso and the Olympic fencing champions of the past Giancarlo Bergamini, Irene Camber, Nicola Dioguardi, Clara Mochi, Gianluigi Saccaro that have been given their tribute to Edoardo Mangiarotti the fencer with most medals ever.

During the “Award Ceremony” Ching-Kuo Wu Member of IOC Executive Committee let alone President of AIBA (International Amateur Boxing Association) was awarded with the “Excellence Guirlande d’Honneur”. He was awarded Roberto Cammarelle (silver medal at London 2012) with a “Special Award” with the boxers of the Italia Thunder led by Clemente Russo (silver medal at London 2012).

Live broadcasted on Italian television RAI TV, radio, newspapers and websites, streaming video. “Sport Movies & Tv 2012” was the protagonist on Rai Sport 2, the Italian State Television channel fully dedicated to sport edited by Auro Bulbarelli, for 5 days. A 60 minutes daily programme with a dedicated studio television in the 3 Festival’s seats, hosted by the journalist Piergiorgio Severini, during which, beyond the projection of the best images of the videos in competition, of the outstanding moments of the event including the Opening and the Awarding Ceremonies, has been broadcasted the interviews to sport, cinema and Tv figures, to directors, to international producers and to the professionals.

Follow up the Workshop “New international sport television market trends“ carried out in Beijing during the “30th World FICTS Challenge” have been deepened in Milano the topics discussed in China. The President Prof. Franco Ascani has communicated the creation of a “Permanent Forum” dedicated to the sports television market that will be composed by the professionals present today, the main actors of sports broadcasting and the members of FICTS Committee “Market Television and Movies Rights”. The Forum will gathered periodically on occasion of the 14 stages of “World FICTS Challenge”. FICTS will continually inform – for free – all the members through the weekly Information’s Agency “SPM & TV” open to the participation of all the operators of the field (the Final report of Prof. Ascani is available on www.fictsfederation.it/marketreport.pdf).

The Sala Parlamentino in the Palazzo Giureconsulti seat of the Festival was the theatre of Meetings and Workshop that have enriched the program of “Sport Movies & Tv 2012”. The International Workshop “IOC/OTAB/FICTS/WFC” with the Report of Prof. Ascani about the “30th World FICTS Challenge – Beijing Worldwide Final of Championship of Cinema and Television Sport” held in Beijing (China) and with the presentation by the representatives of the International FICTS Festival of  the “World FICTS Challenge” with the participation of Francis Gabet Director of Olympic Museum. The 2013 Calendar will be defined by the FICTS Executive Committee by January.

The Presentation of the book “The game and sport in the pictorial art” cured by Tiziana Pikler and winner of the literary Contest of the Italian Olympic Committee by the author with the participation of Volha Piashko the artist who won the “IOC Olympiart Contest 2012” with the participation of Dr Mauro Checcoli President of Olympic Italian Academy.

On the occasion of “Sport Movies & Tv 2012” there were (to Palazzo Giureconsulti with free entrance) four unpublished exhibitions that have recorded a great crowd of passionate and curious people. The Suite Hall has hosted the Exhibition “The best of London 2012” with the photos of the most exciting moments and the performances of the athletes at the 2012 London Olympic Games. Olympic Kenyan champion Brimin Kipruto stumbles and falls on the track 700m from the finish line leaving his fellow countryman Ezekiel Kemboi to race to victory; Natalia Pacierpnik needs all her concentration and endurance to navigate the raging waters of the Lee Valley White Water Centre; the first members of the IOC’s management committee in 1896 in Athens with Pierre de Coubertin. In Paris in 1894, the goal was achieved: the revival of the Games was accepted unanimously. The International Olympic Committee was founded. The Exhibition was inaugurated by Antoine de Navacelle (great nephew of Baron Pierre de Coubertin) and by Francis Gabet Director of the Olympic Museum. “30 Movies for 30 years” the posters of the best sport movies from 1982 till now (from “Rocky III” with Sylvester Stallone till recent “Trouble with the curve” with Clint Eastwood) and “Happy Birthday FICTS“, 50 panels for 30 years of the Federation in the world.

THE SEATS: 3 LOCATION FOR WORLDWIDE EVENT

Three location have been hosted “Sport Movies & Tv 2012”. The Auditorium of “Palazzo Lombardia”, the new seat of Region Lombardia, has hosted the “Opening Ceremony”. “Palazzo Giureconsulti” (Piazza Mercanti, 2), historical sixteenth-century building, has accommodate the “core business” of the Festival with Projections, Meetings, Workshops, Exhibitions, Side events. The prestigious seventeenth-century “Palazzo Cusani” has opened the doors to Sport, Television and Culture for the delivery of the “Guirlande d’Honneur“, the “Mention d’Honneur” and “Special Prizes” to the winners of “Sport Movies & Tv”.

Great participation of the audience to the “Award Ceremony” for the delivery of the “Guirlande d’Honneur”, of the “Mention d’Honneur” and of the “Special Prizes” to the winner at “Palazzo Cusani”. Ms Franca and Alessandro Cannavò, son of the historical Director of the newspaper “Gazzetta dello Sport”, will deliver the “Prize Candido Cannavò for the Olympic Spirit” to Claudio Bonafede director and Carlo Milazzi producer of the film “The King of Swords – Edoardo Mangiarotti” the fencer with many medals at the presence of Mimì and Carola Mangiarotti. The “Infront Sports Action Award” by Federico Monzani Fimi Produzioni (Italy) was assigned to “Fuorigioco”, the “Panathlon International Award” was assigned to “Missing” by Tariq Rimawi (United Kingdom) while “Sporteconomy” by L&V Editrice Srl (Italy) won the “Bruno Beneck Critics Award”.

The full list of the winners is available http://www.fictsfederation.it/jury_minutes_2012.pdf.