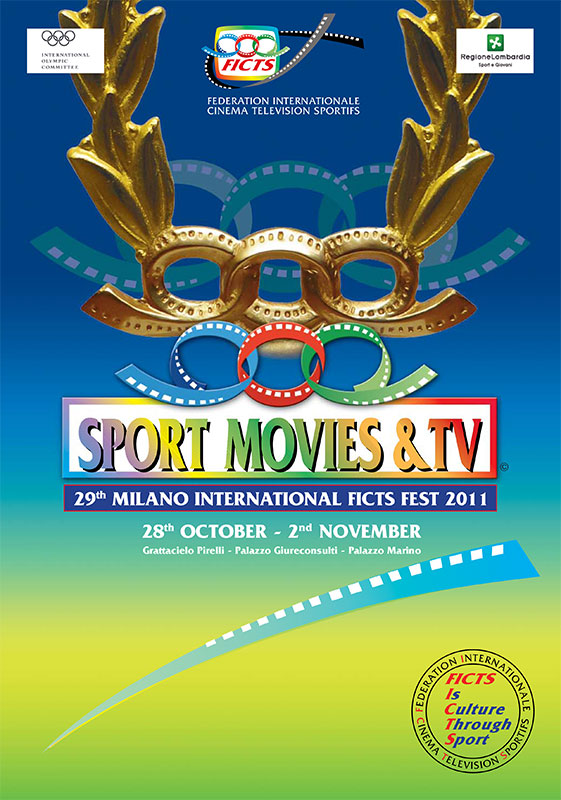 “FICTS IS CULTURE THROUGH SPORT”: 108 COUNTRIES IN COMPETITION

Milano (Italy) – from October 28th to November 2nd – has been the capital world of Sport, Cinema, Tv, Culture and Communication with “Sport Movies & Tv 2011 – 29th Milano International FICTS Fest” (with free entrance), Final of the 14 Festival of the Sports Cinema and Television World Championship “World FICTS Challenge” which takes place in 5 continents. The Festival – under the slogan “FICTS Is Culture Through Sport” – is organized by FICTS (Fédération Internationale Cinéma Télévision Sportifs, joined by 108 Countries) recognized by the International Olympic Committee. The Federation is chaired by Prof. Franco Ascani Member of the IOC Commission for “Culture and Olympic Education” reconfirmed as FICTS President at the Elective Congress for the four-year term 2012 – 2015 (www.sportmoviestv.com/boardoftrustees) from which was emerged that Milano will host a special edition of the Worldwide Final in 2015 in occasion of EXPO 2015.

“Sport Movies & Tv 2011” makes use of the patronage of Region Lombardia, of the Provincia and the Municipality of Milano, of the Chamber of Commerce of Milano. Media partners: Rai Sport 2, Gazzetta dello Sport, AIPS, Mivar. Partners: Infront Media & Sport, Vegetal Progress, Colnago.

A flattering result, interesting results above all about the in great participation on international character of the event, completed with a wide participation on national scale, a success of critic and audience with an excellent quality of the works in competition coming from the 5 Continents. These are the elements that have characterized the 29th edition of “Sport Movies & Tv”. The event, international showcase for media, television broadcastings, worldwide Networks, radio, houses of production, major producers, directors, filmmakers, Olympic Committees and Sports Federations, sport champions, advertising and integrated communication agencies has offered to the audience 1000 champions on the screen, 150 Projections (selected among 968 works), coming from 54 Countries that have had as object 55 sport disciplines, 4 points of projection, 11 Meeting,  2 Workshops, 4 Exhibitions, 4 Side Events, 2 Press Conferences and 30 Awards.

130 HOURS OF PROJECTIONS AND WORLDWIDE PREMIERE

Palazzo Giureconsulti – core business” of the Festival – was the scene (every day from 3.30 p.m. to 10.30 p.m.) of the projection of the works at 4 places at the same time. 97 the Houses of Production, 62 the Networks and the Televisions that gave life to the 2011 edition through documentaries, reportages, adverts, fictions, cartoons, etc. for a total of 130 hours divided into 7 sections. A worldwide “premiere” has open “Sport Movies & Tv 2011”. “Together in Guangzhou“, the official film of the Asian Games was projected on the occasion of the “Opening Ceremony” of the Festival at the Pirelli Tower in Milano (Italy). The aspiration, the dreams and the preparation of the athletes coming from 45 Countries with a view to the Games. The film – that has won the “Guirlande d’Honneur” in the Section “Sport Values” let alone the “Candido Cannavò Award” – has been introduced by the director Mrs Gu Jun (already author of the official film of the Beijing Olympic Games 2008) and by Mr Ruisheng Xu the GAGOC Executive Deputy Secretary General and Chief Executive Producer of the Official Film for the 16th Asian Games let alone V. Mayor of the People’s Government of Guangzhou Municipality.

Giancarlo Abete President of the Italian Football Federation let alone V. President of UEFA has received the highest honuor of the FICTS during the “Award Ceremony”.

Live broadcast on Italian television, radio, newspapers and websites, streaming video. “Sport Movies & Tv 2011” was the protagonist on Rai Sport 2, the Italian State Television channel fully dedicated to sport edited by Auro Bulbarelli, for 6 days. A 90 minutes daily programme with a dedicated studio television in the 3 Festival’s seats, hosted by the journalist Alessandra De Stefano, during which, beyond the projection of the best images of the videos in competition, of the outstanding moments of the event including the Opening and the Awarding Ceremonies, has been broadcasted the interviews to 45 sports, cinema and Tv figures, to directors, to international producers and to the professionals. The “Award Ceremony” took place at Palazzo Marino has been broadcasted live in China too, thanks to the CCTV – China Central Television. The screens at the underground stations and on the buses in Milan broadcasted, thanks to ATM, the “Sport Movies & Tv 2011” promo during the Festival period.

THE SEATS : 3 LOCATION FOR A INTERNATIONAL EVENT

Three location have been the seats that have hosted “Sport Movies & Tv 201”. The “Pirelli Tower”, let alone one of the most famous building and symbol of Milano with its 127 height meters, has accommodate the “Opening Ceremony” of the Festival to the “Auditorium Gaber”. Palazzo Giureconsulti (Piazza Mercanti, 2), historical sixteenth-century building, has accommodate the “core business” of the Festival with Projections, Meetings, Workshops, Exhibitions, Side events. The Sala Alessi, in the prestigious location of Palazzo Marino (Piazza Scala, 2) seat of the civic administration just in front of the famous theatre, has host the “Awards Ceremony” and the delivery of the “Guirlande d’Honneur”, to the winners of “Sport Movies & Tv”.

On the occasion of “Sport Movies & Tv 2011” there were (to Palazzo Giureconsulti with free entrance) four unpublished exhibitions that have recorded a great crowd of passionate and curious people. The Suite Hall has host the Exhibition “One penalty of Oscar” with a soccer field inside Palazzo Giureconsulti where people had tested their soccer skills. There were shown 20 film posters that made the history of soccer. “Colnago: the passion travels on two wheels” with the relics coming from the Colnago Museum, selected by Mister Ernesto. The Ferrari Bycicle 2011, the Colnago 150° Anniversary of Italy, Thomas Voeckler’s bicycle (Yellow Jersey at Tour de France 2011) and the Colnago Bycicle used by flagship of the Exhibition. “100 dvd on basket” was the Exhibition dedicated to the basket world curedby Mirco Cussigh. There were shown 100 original dvd covers – coming from International collectors – of basketball films that made the history of cinema and the original posters of the film of the basketball history from 1920 till nowadays. “London 1948 – London 2012” a spotlight on London 2012 Olympic Games with a blast from the past with the Games hosted by the English capital. The Exhibition dedicated to the world sport event par excellence with the London 2012 Mascottes, Wenlock and Mandeville, the Poster of the lighting of the Olympic flame, 1948 and 2012 Official Posters, etc.

The Sala Parlamentino in the Palazzo Giureconsulti seat of the Festival was the theatre of Meetings and Workshop that have enriched the program of “Sport Movies & Tv 2011”. The International Workshop “IOC/OTAB/FICTS/WFC” with the presentation by the representatives of the International FICTS Festival of  the “World FICTS Challenge 2012”. The Workshop “New sport television market trends” with the discussion on the tv rights of the productions at the conclusion of the meeting that have been organized in Barcelona (Spain), Saransk and Istanbul (Turkey). The Workshop “The ball deflated” with the presentation of the Research realized by the University of Milano-Bicocca about the economic trend of professional Football clubs on the threshold of financial fair-play. The Meeting “Youth, sport, health and wellness”: presentation of a Research conducted on a sample of 3.000 young people between 14 and 19 years, with the aim of identifying the propensity to sport, the eating habits and lifestyles of young people for EXPO 2015.

Great participation of the audience to the Award Ceremony for the delivery of the “Guirlande d’Honneur”, of the “Mention d’Honneur” and of the “Special Prizes” to the winners, in the Sala Alessi crammed with people, in the sternly frame of Palazzo Marino. The documentary “Paulineplatz”, that analyzes a new model of sport and business adopted by the St. Pauli, football team of Hamburg managed directly by own supporter produced by Shoot Tv and Sporteconomy has won the “Excellence Award 2011 – Colnago”. Mrs Franca and Alessandro Cannavò, son of the historical Director of the famous Italian newspapaer “Gazzetta dello sport”, have delivered the “Candido Cannavò Award” to Mr Guo Benmin (producing) and Gu Jun director of the official film of Asian Games 2010 “Together in Guangzhou” (China Central Newsreel & Documentary Film Study – China) introduced in preview to “Sport Movies & Tv”. The full list of the winners, awarded with the “Guirlande d’Honneur”, the “Mention d’Honneur” and the “Special Prizes”: http://www.fictsfederation.it/awards.pdf

All the photos of the “Sport Movies & Tv 2011” divided for each event, are available on http://sportmoviestv.net/photogallery.

The Official Catalogue (104 pages) with published synopsises, pictures, timetables and day of projection is on-line on http://sportmoviestv.net/catalogue

The Trailer of the video at link http://sportmoviestv.net/trailer.

The FICTS President Prof. Franco Ascani will attend to the “Aspire4Sport Congress & Expo 2011”, meeting place of the main representative of the most prestigious Sports Organizations coming from all over the world, which will take place in Doha (Qatar) from November 11th to November 15th. Among the protagonists that will attend to ASPIRE4SPORT: Ruud Gullit, Carlo Ancelotti, Clarence Seedorf, gli Harlem Globetrotters, etc. The Federation last year was the organiser of the Exhibition entitled “FICTS is culture through sport”. Among the others, were displayed 600 sports memorabilia (the Olympic Games collection card, Ayrton Senna’s phone card, the July 1892 “The illustrated London news” magazine, sports relics, etc). The best images of “Cinema and Sport” of 5 sports disciplines will be projected on the 10 present video installations.