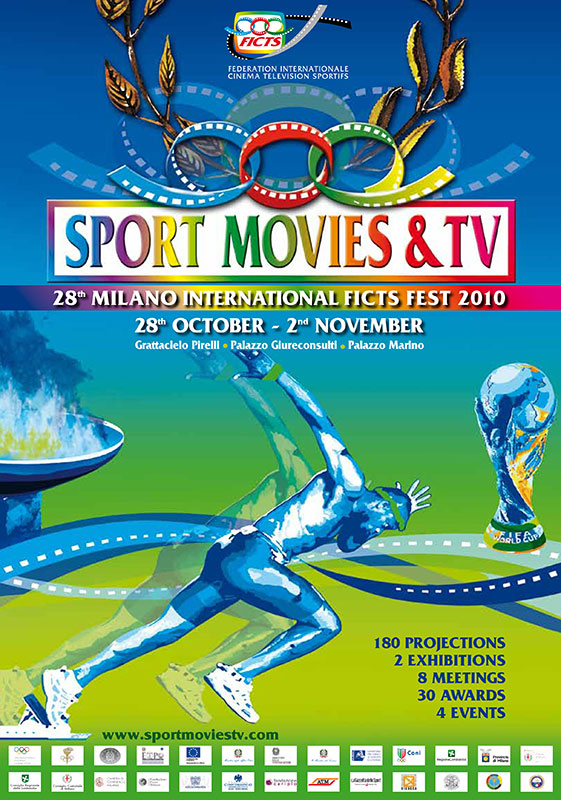 THE MESSAGE OF THE FICTS PRESIDENT PROF. FRANCO ASCANI

“We have recorded in 2010 a flattering results of audience and critic for the FICTS activities and in particular for the 14 Festivals of the “World FICTS Challenge”, thanks to a profitable agreement with the International Olympic Committee and thanks to a qualifying participation on international level. The high quality of the Guests, of the participants and the new adhesions to the Federation, have shown increasing prospects for the future. My personal aim, of the Federation and of the 107 Member Countries is to further develop, in the new year, “the culture through sport” and to promote the acknowledge of the Olympic Movement in order to make a life style for all the different people in every Countries and transform sport in a global movement at the humanity’s service, based on the values of universality, tolerance and ethics that are a precious legacy for the property.

A flattering result, a great participation on a national and international scale, an excellent quality of the works in competition and meaningful perspectives for the future. These are the elements that have characterized the 28th edition of “Sport Movies & Tv” with the motto “Culture through sport”. 6 days of cinema, tv, sport and communication during which have been presented to the audience 1000 champions on the screen, 150 Projections (selected among 986 videos), coming from 44 Countries that have had as object 50 sports disciplines, 11 Meeting, 4 Workshops, 3 Exhibitions, 4 Side Events, 2 Press Conferences and 30 Awards. There will be 102 journalists.

“Sport Movies & Tv 2010 – 28th Milano International FICTS Fest” has recorded a big success of critic and public. It has had the following types of media coverage: 6 tv live evenings on Rai Sport 2, the RAI – Italian State Television channel fully dedicated to sport edited with 90 minutes of daily programme from the 3 Festival’s seats, 308.000.000 accesses to the FICTS website www.sportmoviestv.com, 162.000 web pages visited every month, 75 National Heading Television, 18 National Radio, 324 articles on national newspapers and periodicals, 546.000.000 results on Google, 304 citations on web sites, 311 abstracts of press agencies, 102 abstracts of Information agencies, 5.000 copies of the videos of the event. The “Award Ceremony” that has taken place on November 2nd at Palazzo Marino has been broadcast live in China on the CCTV – China Central Television.

THE TARGET AND THE AUDIENCE

The Giureconsulti Palace has been the seat (from 3.30 p.m. to 10.30 p.m.) of the projections of the videos in competition to “Sport Movies & Tv 2010” 7 points of projection. 72 directors, 80 Producers, 97 Houses of Production, Network and Television that have given life to edition 2010 through documentaries, reportages, spot, fiction, for a total of 190 hours of projections. 197.100 the audience inside and outside: Milano and Province 41%; Region Lombardy 34%; other Regions of Italy 14%; foreign Countries 11%. The highest target of the audience to the Festival has been included among 31/40 years with 26% of the presences following by the target 21/30 years with 24% and 41/50 years with 21%.

“FICTS IS CULTURE THROUGH SPORT” IN THE WORLD

The FICTS international balance 2010 has been positive. The President Prof. Franco Ascani was  taken part of the IOC Commission for “Culture and Olympic Education” that – during the meeting on 9th December in Durban (South Africa) has approved some proposals promoted by the Prof. Ascani. The FICTS was present to Doha (Qatar) with unpublished Exhibition “FICTS is culture through sport” dedicated to the promotion of the sport and cultural values. The exhibition was staged at “Aspire4Sport Congress & Expo”, a combined exhibition and congress, meeting place of World Sports Organizations, Federation, Managers, Journalists and Sport Champions, Broadcasters and Networks from all over the world. The President Prof. Franco Ascani was also taken part at Doha to the Forum “Sports & Culture” with the relation on the topic “Sport & Cinema” and has been “Guest of honour” to the 2nd International Forum “Russia – Country of Sports” that had took place in July to Moscow where has participated to the Round Table “The role of sports cinema and television in sports and healthy lifestyle promotion. Foreign countries experience”. The FICTS protagonists in Beijing where the President has participate to the International Forum “Olympics through the visual Image” with the report on “Youth and the Olympic images”.

Milano (Italy) – from October 28th to November 2nd – will be the world capital of the Sport, Cinema, Culture and Communication with “Sport Movies & Tv 2011 – 29th Milano International FICTS Fest”. The Festival (with free entrance) is organized by the FICTS (Fédération Internationale Cinéma Télévision Sportifs, joined with 107 Countries) recognized by IOC – International Olympic Committee. The Federation is presided by the Prof. Franco Ascani member of IOC Commission for “Culture and Olympic Education”. The Festival, which assigns the “Guirlande d’Honneur” every year, – the highest honour of the FICTS – to the best production coming from all over the world, is articulated in Projections, Meetings, Encounters, Workshops, Exhibitions, Side Events, Press Conferences, Awards. 6 competitive Sections: 1) Olympic Values, 2) Documentary, 3) Tv Shows and New Technologies, 4) Sport & Society, 5) Movies, 6) Sport Adverts.

The Official Rules is available on http://sportmoviestv.net/rules_2011

The “Entry Form” is downloaded http://sportmoviestv.net/entryform_2011

THE FICTS ENGAGEMENT WITH THE YOUTH: 3 MILLIONS ON TRACK

On January 13th 2011 in Milan (Italy), will be presented the “Trofei di Milano – More sport with the young people”, interscholastic championships of track-and-field (with free registration), for the students of the Primary and Secondary Schools of Milano and Province. The sport-cultural initiative, the only one of “Sport for all” in Italy, will recorded the entry of the three millions participants, the absolute record that haven’t no other event in the world. The “Trofei di Milano” – with the motto “More sport in the school”, are organized by FICTS in collaboration with the highest Institutions and the AICS. FICTS joins young people in sharing the same purpose.

NEW-ENTRIES IN THE FICTS COMMISSIONS

The FICTS Executive Committee has deliberated the new-entries in the 4 Federal Commissions with 7 new members that, with own know-how, will contribute to make more active the excellent work carried out already by the other members the Commission. Juli Pernas (Spain) Director of the Fundacio Olympic Barcelona and Shamil Tarpishev (Russia) IOC Member and Russian Tennis Federation  President are take part of the International Festival Commission while Anthony Alcalde (Nicaragua) is the new member of the Marketing & Communication Commission. Antonio Bruni (Italy) Head of the International Festival of RAI (Italian State Tv), Ester Calatayud (U.K.) Channel Manager of the ESPN and Barbara Destefanis (Spain) Responsible of Production of the Nikita Distribution are the new members of the Market Right Television And Movies Commission. Ward Abdallah (Qatar) Executive Director of the Aspire Academy for Sports Excellence is the new member the Culture, Education and Youth Commission.

Great success for the video absolute winner “Con le ruote per terra” (produced by the Briantea ’84 – presided by Mr Alfredo Marson) to the 28th edition of “Sport Movies & Tv”. After the “Guirlande d’Honneur” in the Section “Sport & Society”, the “Excellence Award 2010” and Panathlon Award, the video was awarded with other acknowledgment. The film, that tell about the sensitive topic of the disability, has awarded with the “Italian Sport Awards” as “Best sport film of the year”. The Prize has been delivered, among the other, also to Giuliano Razzoli gold medal to Vancouver 2010 ad “Best sportsman of the year”, to Emanuela Maccarani which “Trainer of the year” of the Italian National Team of rhythmic gymnastic, for recent second success to Moscow of the world title and to Inter F.C new-champions team of the World for club. All were awarded with the “Excellence Guirlande d’Honneur” during the “Opening Ceremony” of “Sport Movies & Tv 2010” that has took place to Milano (Italy) on 28th October.