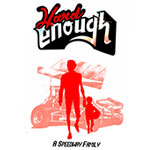 After a 25 years hiatus, a son takes his father, Gil Cameron, back into the dirty, fast and dangerous world of Australian Sprintcar  Racing in order to learn what made his father so addicted to it in the 80’s. The two set off on a road trip across the beautiful Australian bush between the biggest race on the Sprintcar calendar. As their journey progresses, the story of Gil becomes more clear: in the 80s he was known as a terrifyingly ferocious driver, willing to risk his life for a victory.