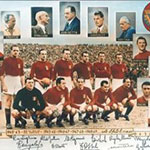 The feats of the invincible Granata men, the Grande Torino team, victim of the Superga air disaster on 4th May 1949. Virgilio Maroso, Guglielmo Gabetto, Mario Rigamonti, Franco Ossola and the captain Mazzola: their story and that of the 40’s, young men symbol of the Italy that rises again after war, rolling up its sleeves looking for normality. The tragedy destroys the dreams of thousands of children and opens the door to the legend to 17 players, who died with three coaches, three managers, three journalists and four men of the crew. Superga became the first collective mourning of modern Italy, year zero of the Italian soccer, stumbling block of the collective memory of the Country.