GOLD CUP 2019 – WHY IS MEXICO NOT A WORLD FOOTBALL POWER? 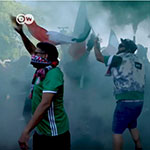 Mexico should be a football world power. It is a nation that’s home to about 130 million people, the 10th largest country in the world. Football is the number one sport by far, with an incredibly successful domestic league in Liga MX, standout players capable of playing in the world’s top leagues, and a obsessive passion for football. So, what’s the problem?