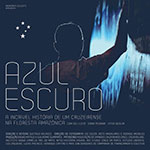 Lúcio is a Cruzeiro fan who lives in the depths of the Amazon Jungle. After going blind and almost committing suicide, he began to write a book about Cruzeiro, his passion since his childhood as an orphan boy. By a surprising chance, his story hidden in the interior of the forest reached Belo Horizonte, hometown of the club, bringing the life of a solitary football fan to an exciting climax.