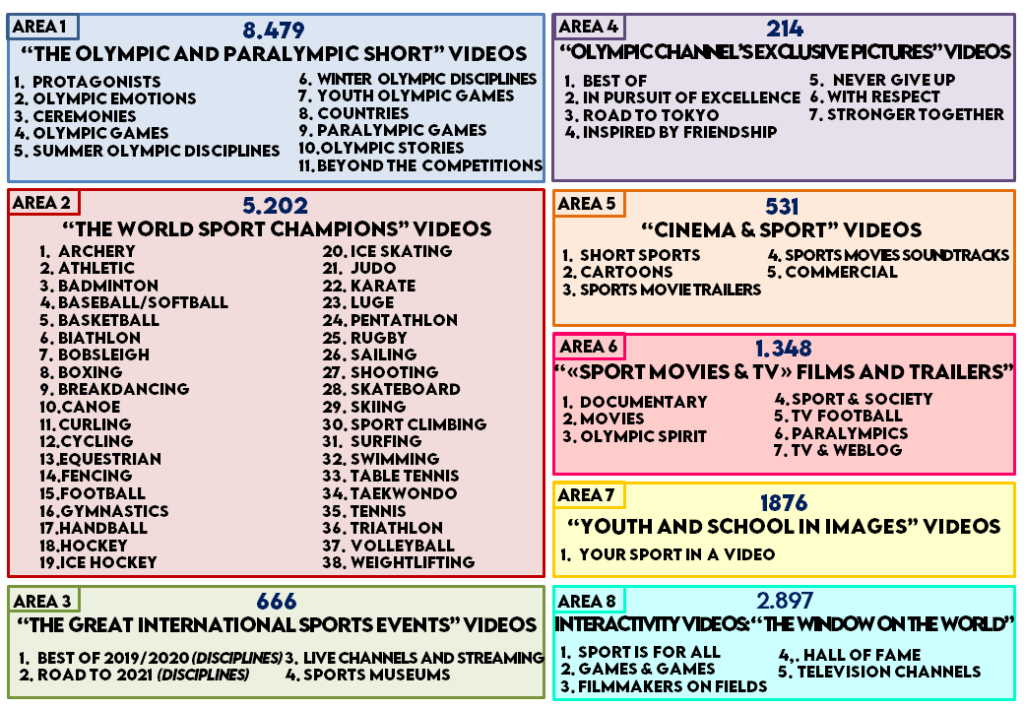 The Countries which join to FICTS – Fédération Internationale Cinéma Télévision Sportifs (recognized by the International Olympic Committee and headed by Prof. Franco Ascani IOC Member for “Culture and Olympic Heritage Commission”) are 123. FICTS provides for free the picuteres of 102 sport disciplines to relive involving and exciting moments of “global Movement at the service to humanity”.

– “THE OLYMPIC AND PARALYMPIC SHORT VIDEO Area – CLICK HERE. A precious opportunity to relive engaging moments that tell the deeds of the protagonists of the Games divided into 10 Sections which include, among others: The characters (Michael Phelps, Sergey Bubka, Emil Zátopek, Muhammad Ali, etc.), The Ceremonies, The aspects emotional games (the pain, fear, desire, the joy of winning and the bitter taste of defeat), The presence of women (Nadia Comaneci, Katie Ledecky, Simone Biles, etc.), The exploits of the greatest sprinters (Usain Bolt, Pietro Mennea, Jesse Owens, Carl Lewis, etc.), Team sports (Messi, Neymar for football, etc.), The Paralympics, etc.

– “THE WORLD SPORTS CHAMPIONS” Area – CLICK HERE. The gretaest sports names of all times; their performances leap off the screen to come true and enter history.

– “CINEMA & SPORT” Area – CLICK HERE. The 7th art was born in the same year and city of Modern Olympic Games: Paris 1894. Cinema&Sport: a combination whob have found in the Tv a precious ally for its development, in which the public of a match is equivalent of viewers of a film, as well as the referee or judge could be compared to the producer and the athlete to the actor.

– “YOUTH AND SCHOOL IN PICTURES” Area – CLICK HERE. “You Sport in a Video”: a original competition of autoproduced videos realized by young people with the aim to promote the knowledge of Olympic Paralympic Games and the values of sports world.

– “INTERACTIVITY: THE WINDOW ON THE WORLD” Area (in progress) – CLICK HERE. The users become consumer and producer with the creation of video contents relatings to the Society in which he lives. A past and present showcase where the image spreds the sports message among young people through the realization of videos inspired by the theme “Tell your sports story, your lifestyle, your experiences (yesterday, today, tomorrow)”.

(for exclusive online use)