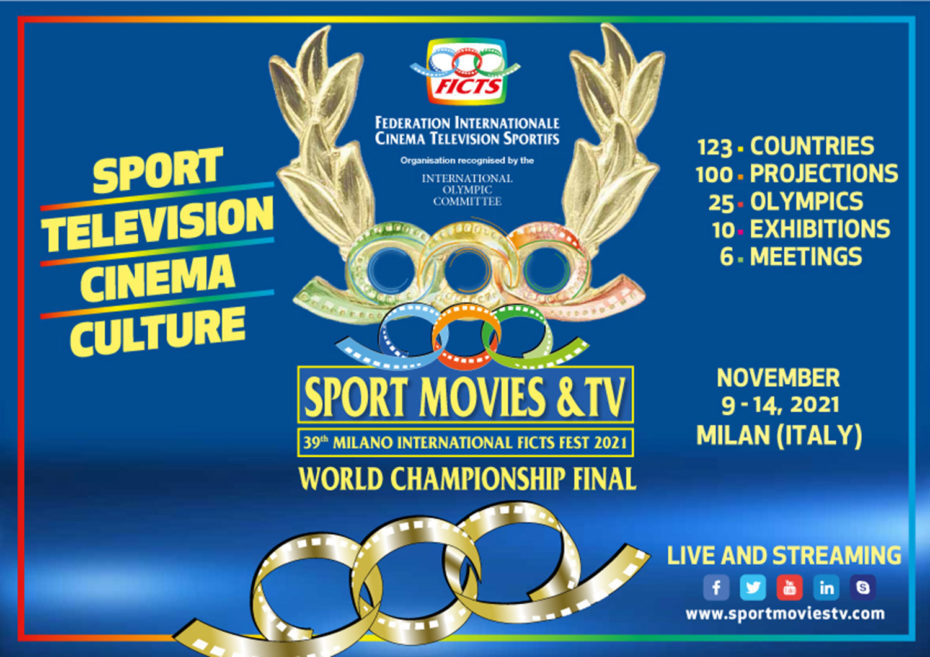 It’s official: the 39th edition of “SPORT MOVIES & TV – MILAN INTERNATIONAL FICTS FEST”, Final of 20 Festival (in the 5 Continents) of the “World FICTS Challenge” Championship of Television, Cinema, Culture and Sports Communication, will take place regularly (in person as well as in streaming) – despite of the emergency of the coronavirus – in Milan (Italy) from November 9 to 14, 2021.

“SPORT MOVIES & TV 2021”: five days of television, cinema and sport culture, a considerable “world showcase” for worldwide networks (including representatives of the 1,725 ​​sports TV channels of the 5 continents), new media, production companies, producers, directors, Olympic committees and sports federations, sports champions, radio, advertising and communication agencies that will illustrate the universe of television and sports cinema through documentaries, commercials, reports, fiction, cartoons, etc. in one of the 7 competitive Sections. FICTS will contribute to the promotion of the Tokyo 2020 and Beijing 2022 Olympic and Paralympic Games through several events during the Final in Milan.

The Festival is organized by FICTS – Federation Internationale Cinema Television Sportifs (chaired by Prof. Franco Ascani and recognized by the International Olympic Committee) which promotes the sports values ​​through footages in the 123 joined Countries.

The Organizing Committee of “SPORT MOVIES & TV – MILAN INTERNATIONAL FICTS FEST” is also evaluating the possibility of using the technology with projections of some works in competition on the Mediasilo platform in 2.0 mode as well as on the FICTS website www.sportmoviestv.com, with a window dedicated to the testimonies and interventions of the protagonists, directors and producers of the productions in competition connected in streaming from the 5 Continents.

A five-days kermesse of TV, Cinema, Communication and Sports Culture in which sports stars such as CR7, Messi, Edin Dzeko, Vladimir Petrov, Alina Kabaeva, Usain Bolt, Sebastian Vettel, Roger Federer will alternate, on screen and online with a new formula (documentaries, reportages, spots, fiction, cartoons, etc. with sport as protagonist) through Meetings, Exhibitions (including “From Beijing 2022 to Milan-Cortina 2026” and 100 Olympic Memorabilia of all time), Workshops, activities and performances and a space for the young people selected among the 42,000 participants of 63 schools who started the “Sport at home” activities. For the youngest, there will be a special section on cartoons.

Call for entries. In order to submit the sport productions into “Sport Movies & Tv 2021”:

Film Free Way: it’s possible to submit the productions also through the platform in the page dedicate to the Festival at link https://filmfreeway.com/SportMoviesTv