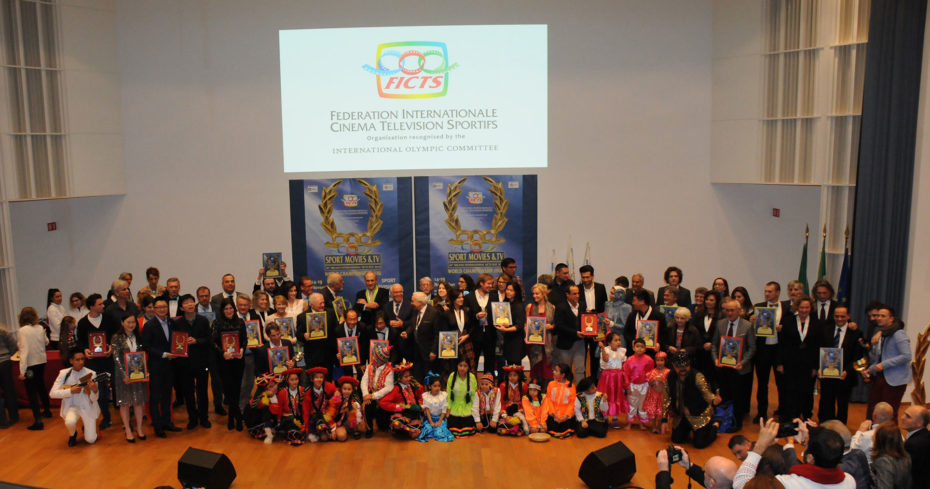 The Ceremony was opened by the performance of Fanfara Terzo Battaglione Carabinieri Lombardia, by the video messages of the IOC President Dr. Thomas Bach, by the FIA President Jean Todt, by the regards of the FICTS President (Fédération Internationale Cinéma Télévision Sportifs) Prof. Franco Ascani, by the Undersecretary to the Presidency of the Council of Ministers with responsibility for sport On. Giancarlo Giorgetti and by the President of the Lombardy Region Dr. Attilio Fontana.

The Russian Soprano Olga Lehmann-Balashova has sung “Casta Diva”, the aria of the protagonist of Vincenzo Bellini’s “Norma”.

Prestigious guests from the sports, film and television world attended the final evening of “SPORT MOVIES & TV 2018”. They have been awarded of the “Excellence Guirlande d’Honneur”, the highest honor of the FICTS, considered the “Oscar of TV and Sport Cinema”: Alisher Usmanov, President of the FIE, the international governing body of fencing  as well as philanthropist of sport. The Italian actor and comedian Lino Banfi has been awarded with the “FICTS Guirlande d’Honneur” while the Director of the Nice National Theater Irina Brook (daughter of playwright Peter Brook) received the “FICTS Diamond” and Mikhail Kusnirovich (Bosco Sport and Magazzini Gum in Moscow).

The pictures of all days of “Sport Movies & Tv 2018” are available at link http://www.sportmoviestv.com/fotos/sport-movies-tv-2018/.

The “Opera Prima – Enrica Speroni” Prize was awarded to the film “250 Steps” (PGM Network / Sportnetwork – Serbia), dedicated to the Yugoslav national youth team that won the title of World Basketball Champion led by the legendary trainer Svetislav Pesic in Bormio in 1987.

The complete list of the winners of “Sport Movies & Tv 2018” is available on http://www.fictsfederation.it/jury_minutes_2018.pdf.

A wide participation on a national and international scale, a critical and public success, in the presence of sports champions, Institutional and sports authorities, producers and international directors, have characterized the 36th edition of “Sport Movies & Tv” awarded the “Medaglia del Presidente della Repubblica” by the President of the Italian Republic Hon. Sergio Mattarella.