The National Sports Museum at the “Allianz Riviera” Stadium in Nice – Cote d’Azur (on the eve of the friendly football match between France and Italy) will be the venue, on Thursday May 31st, of the Award Ceremony of the the third edition of the “Côte d’Azur International FICTS Festival” (www.azursportfilmfestival.fr).

“Special Guest”  the Olympic, World and European champion of pole vault and member of the International Olympic Committee Yelena Isinbaeva.

The President of the FICTS – Federation Internationale Cinema Television Sportifs, Prof. Franco Ascani, Member of the IOC Commission for Culture and Olympic Heritage, will attend to the Ceremony. The event – inserted in the “World FICTS Challenge 2018 (WFC)” Worldwide Championship of Cinema, Television and Sport Culture – is organized by FIFS – Association chaired by Claire Peradotto in collaboration with FICTS – Fédération Internationale de Cinéma et Télévision Sportifs (Renato Tullio Ferrari FICTS Delegate in France), with CDOS 06 – Olympic Committee and Sports Departmental of Maritime Alps chaired by Philippe Manassero and with the National Museum of Sport.

During the Festival, as part of the “Olympic Images E-Motions” Program promoted by FICTS in agreement with the Olympic Foundation for Culture and Olympic Heritage of the IOC, there are scheduled, at the “Center de formation du Nice Volleyball” and at the “Villa Eilenroc Antibes”, the projections of the exclusive footages of the Olympic as well as footages of performances of the protagonists of the Games of all time for the worldwide promotion of Olympism and of the Olympic Culture and of Sport for All. 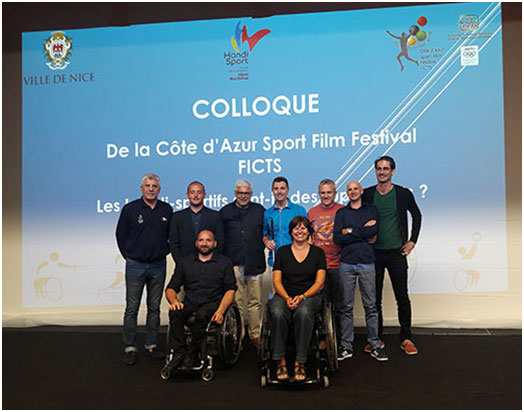 Prof. Ascani participated, on Wednesday, May 30th, to the special evening dedicated to basketball and in particular to the century of history of basket in Antibes as well as the 75th years of the foundation of the Olympique Antibes Juan Les Pins, presided over by Dr. Jean-Marc Casabo, with the projection of the film “Semper vivens” about the centenary history of basketball and the club OAJLP where played players as Jean-Claude Bonato, Dan Rodriguez, Jacques Kachemire, Jean-Claude Lefebvre with whom, in 1970, it won the first National Championship of France de Nationale 1. “Guest of Honor”, together with the champions of the past of the first basketball club of Antibes, will be the Mayor Dr. Jean Leonetti former President of the Inter-communal Community of Antibes Sophia Antipolis as well as former Minister for European Affairs of France.

The Club des Entreprises de Sophia Antipolis – besides to host the “Opening Ceremony” (Monday 28 May) at the presence of the Mayor of Biot Mrs Guilaine Delbras – is the venue of some of the 23 “Selected” films (among 259 participants) from the Jury chaired by the journalist and writer Mr Gérard Camy, President of the Cannes Cinéma Association and author of the “Cinema & Sport” Volume. The “Maison de l’Etudiant – Campus Saint Jean d’Angely Nice”, the “Centre de formation du Nice Cavigal Basket femminin et Lycée Estienne d’Orves – Nice” and the“Centre International de Valbonne” host, during the four days of Festivals, projections and meetings.

The winners of the “Cote d’Azur International FICTS Festival” will participate in “Sport Movies & Tv 2018”, the World Final scheduled in Milano (Italy) from November 14th to 19th.