The second edition of “Côte d’Azur International FICTS Festival” has been officially presented to the press on September 12th in Nice (France). 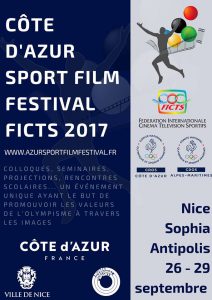 The Festival – whose aim is to promote the Olympics’ values through images (Culture, Integration, Education, Respect, Welfare, Solidarity) – will be held in different locations from September   26th – 29th, in the French Riviera, particularly in Nice at Musée National du Sport and in Sophia-Antipolis at Golf Club le Provençal (Centre Internationale Valbonne) seat of the “Opening Ceremony” on September 26th. The National Olympic Museum will host during all the period of the  Festival – besides the “Olympic” Exhibition” – the projections of the exclusive images of the Olympic Games of all time in order to further promote, at international level, the Olympism, the Olympic Culture and “Sport for All” in the framework of the Project “Olympic Images Emotions” promoted by FICTS in agreement with the IOC Foundation for Culture and Olympic Heritage. A specific program “Olympic Footage IOC” is planned for the public school. The National Olympic Museum will also be the venue of some meeting as well as of the “Award Ceremony” on September 28th. The “Centre International de Valbonne” and Skema Business School in Sophia Antipolis will host meeting and projections.

The Jury, chaired by Gérard Camy Professor and historian of Cinema, member of the Film Critics French syndicate, President of the Cannes Cinema Association, is composed by: