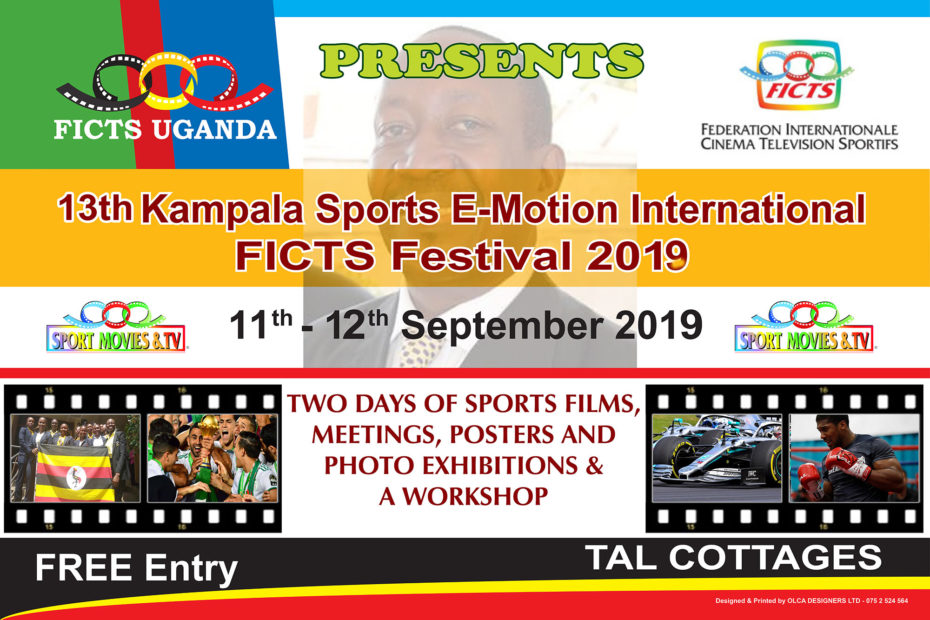 FICTS Uganda are the promoters and organizers of the “13th Kampala International FICTS Festival” that will be held in Uganda, in the city centre of Kampala from 11th -12th September, 2019, with free entrance for the audience. During the event, recognition and winning certificates will be duly awarded.

The Festival is organized – in the framework of the “World FICTS Challenge” – by FICTS Uganda (chaired by Mr Dean Kibirige) in collaboration with FICTS, UBC – Uganda Broadcasting Corporation and the National Council of Sports.

FICTS Uganda aims to spread the knowledge and diffusion of sport movies and videos that , in different languages and different production forms, contribute to the development of the artistic and cultural trends in the TV World and Movie-world . The aims of this event are:

“13th KAMPALA INTERNATIONALE FICTS FESTIVAL 2019” is open to all television, movie and new media productions dealing with sports, or having sport in all its different expressions and manifestations as their main subject. Production with pornographic content will not be accepted; neither will works inspired by political, religious or racial fanaticisms.

All the movies, videos, TV Shows, short and full length productions about any kind of sport and its various expressions produced in the period 2015/2016/2017/2018 /2019 exception for documentary section 2000-2018, will be allowed to compete in one of the following 7 sections:

 Sport for all, Education, Technique and New Media

The Festival will be competitive. The works are judged by a jury (all those who have direct and indirect interest being excluded ) made of up to 6 exponents of movies, TV Media, Sports Culture (appointed by FICTS Uganda) will award officially, without appeal, the official certificates and prizes.