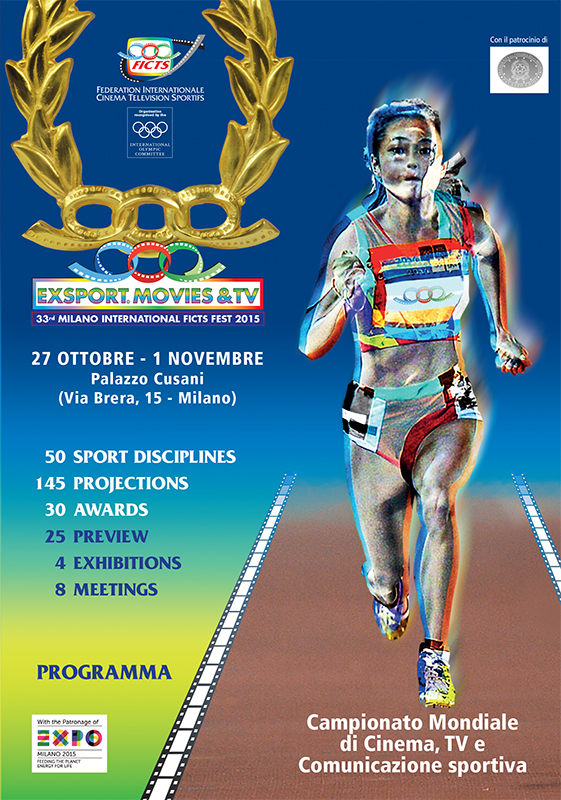 SUCCESS IN THE CINEMAS FOR THE “EXSPORT MOVIES & TV 2015” WINNER

“She got game” (Pantera Film – Italy) the docu-film dedicated to the female masketball world directed by Silvia Gottardi, awarded in Milan on 1st November with the “Guirlande d’Honneur” in the “Documentary – Team Sport” at “EXSPORT MOVIES & TV 2015 – 33rd MILANO INTERNATIONAL FICTS FEST” (Worldwide Championship of Sport, Cinema and Television programmed in 16 Festivals in  five Continents), is obtaining a positive outcome in the Italian cinemas. A documentary conceived, filmed and produced by women who intend to transmit their energy, enthusiasm and passion to promote women’s basketball, and more in general female sport, overcoming all gender stereotypes.

In Federation Official website homepage www.sportmoviestv.com the images of the best moments of the Festival and the trailers of the 145 works (https://www.youtube.com/watch?v=RNSnbV0bQs0) and all the people awarded during the “Award Ceremony” (https://youtu.be/1TJPYq_1lUM) are online.

A flattering evaluation, interesting results especially for the strong international character of the event, complete with a wide participation at the national level, a critical success and audience (crowded halls and high average audience ratings) and an excellent quality of the works participants from from 5 continents. These are the elements that have characterized the event (international showcase for media, television broadcastings, world-wide Networks, radio, houses of production, producers, filmmakers, Olympic Committees and Sports Federations, sport champions, advertising agencies and communications) which presented to the public – six days of Television, Cinema and sports Culture (https://www.youtube.com/watch?v=pDj0p8OaVkw), 145 selected productions coming from 36 Countries (972 submissions from 55 Countries), 25 Worldwide premieres, 50 sports disciplines, 30 hours of Olympic unpublished footages, 900 Champions on the big screen, 12 screens with 4k images, 80 VIP guests, 25 International guests, 200 Directors and Producers, 202 Broadcasters involved. 85 Companies, 94 Television Networks animated the 2015 edition with documentaries, reportages, tv ads, movies, cartoons, etc. for 84 hours divided in 7 Sections. 2 105’’ screens projected in loop, during the entire event, the best images of the  Beijing Winter Olympic Games

The “Opening Ceremony” –  at Salone Radetzky of  “Palazzo Cusani” – was opened by the warm International Olympic Committee President Thomas Bach’s video message who thanked FICTS and its 113 Member Countries “for the constant support and the strong commitment to promoting the Olympic Games and its values as well as the active participation of the FICTS President Prof. Franco Ascani in the IOC projects”. “Honour Guest” of the Ceremony was José Maria Carreras, one of the greatest tenor in the world (with Luciano Pavarotti and Placido Domingo), Music Director of the 1992 Barcelona Olympic Games and is President of President of the “José Carreras International Leukaemia Foundation” Direttore musicale dei Giochi Olimpici Barcellona 1992 e Presidente della “José Carreras Leukaemia Foundation” awarded with the greatest FICTS Award the “Excellence Guirlande d’Honneur” by the Milan Prefect Dott. Francesco Paolo Tronca.

“Exsport Movies & Tv 2015” was attented by Institutional, Civil, Sports and Military Authorities like Milan Municality Assessor Dott. Filippo Del Corno and Valentina Aprea, Council Member of Region Lombardia. The Member of the Executive Board of the International Olympic Committee and President of International Boxing Association (AIBA) Dr. Ching Kuo Wu has been awarded with the “FICTS Golden Card” as “FICTS Honorary Member”. “Guirlande d’Honneur” to: President of the International Association of Olympic Journalists Dr. Alain Lunzenfichter, Ignazio Maria Tronca Skeet shooting World Champion 2015, Giacomo Agostini holder of 15 world motorcycling titles and Gianni Mura journalist and writer. It was given to his son Davide,  the “Excellence Guirlande d’Honneur to the Memory” of Sergio Bonelli, , founder of the publishing house of the same name, which is in the comic market (“Tex”, “Dylan Dog” and “Zagor”, some of the most popular publications) starting from the 1940s. Giorgio Avola, fencer winner of the gold medal at the 2012 London Olympic Games and at the Moscow World Championship 2015, Atletica Riccardi, Italian Champion 2015 (men), Bracco Atletica, Italian Champion 2015 (women).

FICTS President Prof. Franco Ascani, in his capacity as Olympic journalist, has been inserted in the “Hall of Fame” of the International Association of Olympic Journalists

Awad Bin Mohammed Bin Sheikh Mujrin (Director General of Dubai Travelers Festival) who in December 2014 was the first man to climb Kilimanjaro with camels, was awarded with the “FICTS Excellence Guirlande d’Honneur”.

Mina Valyraki-Papatheodorou winner of the “International Olympic Committee Trophy 2014 – Art and Sport” was awarded with the FICTS “Diamond”.

PRESTIGIOUS LOCATIONS FOR AN INTERNATIONAL EVENT

Two prestigeous locations hosted “Exsport Movies & TV 2015”.The seventheenth century Cusani palace (Via Brera 15, Milano), – inaddition to the Opening Ceremony – was the “core Business” with projections, meetings, workshops, 4 exhibitons, side events, award ceremonies of international guests. Currently representative office of  NATO (North Atlantic Treaty Organization) in Milan and of the Army Military Lombardia Command, is located in front of the “Pinacoteca di Brera” , which includes the National Braidense library, the Academy of arts, the Observatory, a botanical garden.

Testori Auditorium of “Palazzo della Regione Lombardia” (Piazza città della Lombardia– Milan) hosted the “Awards ceremony” with the delivery of “Guirlande d’honneur”, “Mention d’Honnuer” and “Special Awards” to the “Exsport Movies & Tv” winners. The Opening Ceremony (with the band of the Teuliè MilitarySchool) and the Award Ceremony (with the Carabienieri brass band which played “Chariots of Fire” and Mameli’s Hymn) were opened with the dance performances by Carol Alberio  from Milan Italian Dance Federation and Hector Villanueva’s

Palazzo Cusani (Via Brera, 15 – Milano) “core business” of “Exsport Movies & Tv 2015”– in addiction to projections, meetings and Workshops – hosted 4 Exhibitons (opened to public with free entrance) recorded a massive turnout by the fans and the curious. From China “Sport in China. Towards Beijing 2022”  cured by BODA – Beijing Olympic Development Association. China towards 2022 Winter Olympic Games with original Exhibition with photos of sports culture in Beijing (already seat of the Summer Olympic Games 2008) with the in loop projection of Chinese sports films and promotional videos of the 2022 Winter Olympic Games. The Exhbition was opened by Dott. Jiang Xiaoyu BODA V. President.

“THE OLYMPIC GAMES IN… MILAN”

Great success for another great Exhibition “The Olympic Games in…Milan” two halls of  “Palazzo Cusani” hosted only films with Olympic theme and, in collaboration with the Olympic Foundation for Culture and Heritage and the most meaningful images of the Olympic Games of all time.

It has been realized a Photo Exhibition “Cinema and Olympic Games” with original posters of the Olympic Games and an interactive station called “Win your Olympic Medal” which made the audience live the thrill of podium. The section called “Olympic Games – Olympic Spirit” presented a series of works (which won one of the 16 Festivals of the “World FICTS Challenge” Circuit), selected between the 113 Member Countries joined to FICTS.

On 30 October, “Young & Sport” Day, at the end of the meeting “Olympic Games and School”, it was projected  the movie “One world, One dream”, with the message to spread all around the world by Dr. Jacques Rogge’s word, former President of the International Olympic Committee and it was presented a program of specific activities for the Schools including projections of the images with an Olympic theme and debates inside elementary and middle schools with the aim of spreading the Olympic values among the young people.

FICTS President Prof. Franco Ascani delivered to Sergey Pavlov, CHANNEL ONE International Relations department, the “TV SPORT EMOTIONS Award – The best TV sport channel of the world 2015” for the winning network delivered in past editions to EUROSPORT (France) in 2012, CCTV (China) in 2013 and Sky Sport (Italy) in 2014.

The delivery of the award was preceded by the International Workshop “New International Sport Movies Television Market Trends”, the final moment of a series of International Forums (during the FICTS Festival in the 5 Continents) a moment of cultural-professional debate and reflection between TV Networks, Producers, Directors, Journalists and Sector Operators, on the developments, tendencies of TV, Web and mobile to the presence of TV, sport and media personalities.

Based on other Workshops“New International Sport Movies Television Market Trends” Workshops occurred in “World FICTS Challenge” Festival seats in 2015, Prof. Franco Ascani confirmed to the Workshop the will to institute a “Permanent Forum” dedicated to the sector with TV operators, main actors of Sport broadcasting beyond FICTS Commission members “Market Television and Movies Rights”.

Italy, was chosen among 205 affiliates Countries to IOC to present – a worldwide premiere-  for the 5 Continents an highlight presentation of 10 minutes the official movie of 2014 Sochi Olympic Winter Games (22nd of Games story), directed by Sergei Miroshnichenko and produced by Ostrov Studio (Russia) (the film will be finished at the end of this year and will be 180 minutes) at Palazzo Cusani (Via Brera, 15) the “core business”  of“Exsport Movies & Tv 2015”. “RINGS OF THE WORLD”: the values of the Olympic Games, the philosophy of the sport, the ever-changing balance of femininity and masculinity in sport and in society.

“Exsport Movies & Tv 2015” was the protagonist for 8 days on Gazzetta TV (Channel 59 of DT), “Gazzetta dello Sport” television station guided by Claudio Arrigoni, in collaboration with the website Gazzetta.it. A 10 minutes-daily programme in which, in addition to the most beautiful images of the video in the competition and at the highlights of the event were broadcast interviews with sports figures, movie, television, filmmakers and international producers, for professionals present. Live tv, radio and television services, Ceremonies live broadcasted in streaming on the FICTS website www.ficts.com and articles both online and on newspaper (Gazzetta dello Sport, Repubblica, Affaritaliani.it, Olympic.org, Eurolympic.org, CNN Greece, Corriere della Sera, Tuttosport, Corriere dello Sport, Il Giornale, Sportsmall.it, etc.).

On 30th October 2015 at Palazzo Cusani has occurred the four-year Congress and the FICTS General Assembly, where the representatives of the 113 Countries Member have attended the Meeting. Prof. Franco Ascani, who was re-elected unanimously FICTS – Fédération Internationale Cinéma Télévision Sportifs President, for 2016-2019. Vice Presidents: from Uganda Andrew Luwandagga and from Uzbekistan Sabir Ruziev. During the Congress were elected the new Members of the four Permanent FICTS Commissions: Festival, Communication and Marketing, Market rights television and movies and Youth, Education And Culture. During the FICTS General Assembly were shown of the international circuit “World FICTS Challenge 2016” by the organisers of each phase with 5 “new entries”: Teheran (Iran), Dubai (UAE), Evora (Portugal), Spoleto (Italy), and Saint Petersburg (Russia). Prof. Franco Ascani showed the Board of Directors “Report” (already discussed in Kazan on 5-6 august) to representatives of FICTS International Commission, with the Federation objectives and lines action from a political-organizational point of view for the next years 2016-2019.

During the Ceremony attended 97 producers and directors. In evidence on the podium among 22 winning Countries coming from 5 Continents, Italy and Russia with respectively ten and eight Awards, United Stated and Belgium with four and Brazil, China and United Kingdom with three.

The “Candido Cannavò Award for the Olympic Spirit”, dedicated to the “historical” Director of the newspaper “Gazzetta dello Sport” has been assigned to the production “Spirit in Motion” (Studio Ostrov, Prod. VGIK Center Debut – Russia): the official film the 2014 Sochi Paralympic Games.