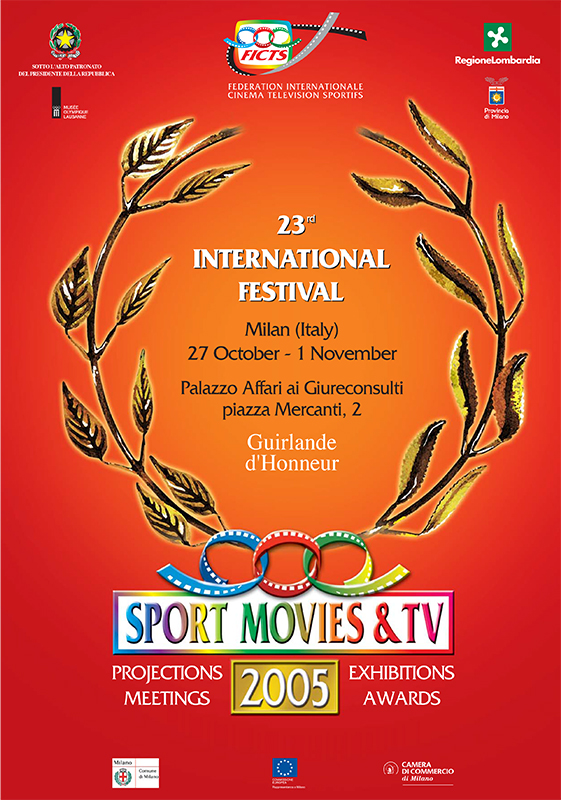 Edition 2005 of “SPORT MOVIES & TV – 23° Milano International FICTS Festival” has touched considerable figures as far as the external visibility on the media. We have been 43 passages on the national TV that in total have dedicated at the event 183 minutes of services, and 155 minutes for locals TV. Moreover, we have been 108 minutes of interviews, informations and radio passages. “SPORT MOVIES & TV” has attracted more of 200.000 spectators and visitors in the 6 days of the event and 285 articles was dedicated on newspapers and magazines. The internet pages dedicated to the event, from a Google research, are about 45.900. It’s in working the DVD of world-wide spread, that it will be produced in 10.000 copies and distributed in all the 99 Countries Members of FICTS.

“SPORT MOVIES & TV 2006 – 24th Milano International FICTS Festival” will be the Final Phase of “World FICTS Challenge”. WFC Rules of “SPORT MOVIES & TV 2006” was approved the 3 of November 2005 by FICTS Executive Committee. The official dates for the WFC phases, with location alredy published, will be communicate within the 20 of December 2005.

FICTS PARTNER OF THE MASTER IN SPORT ORGANIZATION AND SOCIOLOGY

It will start Friday 25 November the University Master of II level in “Sport Organization and Sociology” managed by the Sociology Department of the Milan University – Bicocca. FICTS is one of the Master partner, the only one in Italy of II level in that typology, with more of 60 high level teachers (national and international) and a lot of experts (sport manager, manager of public agencies connect to sport, Olympic champions, sport champions, ecc.). Coordinator of the Master is Prof. Franco Ascani, President of FICTS. Very important names from the teachers: Juri Chechi, Pietro Mennea and Josefa Idem (Members of “FICTS Hall of Fame”) and recently prized during “Sport Movies & TV 2005”. Participate at this Master also Stefania Bianchini, World Champion of boxing, and Viola Valli, former Champions of world of swim, than they are preparing a  professional future in the sport world.

SPEED OF THE BALL

The video of Federation Francaise Tennis, “Ball Time”, was prized with the “Guirlande d’Honneur 2005” in the section “Sport & Solidarity”. This video clip shows the most spectacular aspect of wheelchair tennis, when the ball becomes an object of precision that the player has to dominate in the midst of every movement on the court. The camera takes its position and captures subtleties such of the game – details that strengthen the impression of extreme concentration. Balls and little balls are the protagonists of an interesting study lead from a German weekly magazine on the caught up maximum speed from the same ones in the several disciplines sport.  The record is up to the little balls from baseball, that can be launched until 300 km/h. A particular second place goes to the little balls from golf.  Tiger Woods and its colleagues can swing their balls near of 280 km/h speed.  On the step more low of the podium, before the little balls from tennis, those from badminton, able catching up the 250 km/h.

The world tour of the exhibition “Torino 2006: Olympic Winter Games & More” is still under way. Before the XX Winter Olympic Games (from 10 to 26 February), it’s making a tour in the main localities of the Globe. Prepared under the prestigious “Loggia dei Mercanti”, in the heart of Milan, in occasion of “Sport Movies & TV 2005”, the exposure has been transferred to New York, before making stage in France. The exhibition, with the aim of furthering awareness among general public, from the sporting world to institutions, from the cultural, technical and professional world to media, schools and universities, makes a stop in Lyon.“Torino 2006: Olympic Winter Games and More” under the prestigious Loggia Mercanti in Milan.

In the special standing of sport movies, making from FICTS, projected in the big screen, baseball clearly wins the competition with all the other disciplines, counting 295 productions, 37 more of the boxe (with 258 movies), and nearly approximately double of soccer films (174), auto and motor races (159) and horse races (131). The cinematographic industry in the last years has continued to produced with an incessant rhythm the images of the champions becomes legends. Many works have become classics to see and to admire at a distance of years, beyond that true and own “ambassadors” for the spread of the culture and the sport movement in other Nations.