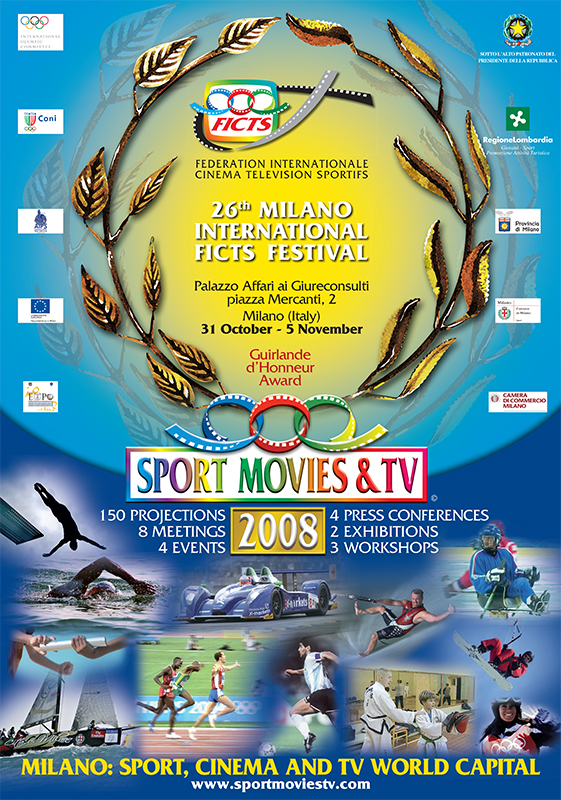 A flattering result, a great participation on a national and international scale, an excellent quality of the works in competition and meaningful perspectives for the future. These are the elements that have characterized “Sport Movies & Tv 2008 – 26th Milano International FICTS Festival”, the most important International Festival dedicated to sports television and movies World-wide Final of the “World FICTS Challenge 2008” (articulated in 12 seats that take place in the 5 Continents). The event (October 31st – November 5th) is been divided, at the presence of 120 producers and 72 directors, in 190 hours, for 6 days in 7 points of projection at the same time (with the maxi screen in Piazza Duomo and in all the tube stations of the city). 180 have been the “selected” works choose among 980 send by 130 houses of production coming from 44 Nations that have for object 50 sports disciplines, 11 Meetings, 3 Workshop, 2 Exhibitions, 4 connected Events, 4 Press conferences and 30 Awards. The Countries associated to the FICTS (Federation Internationale Cinema Television Sportifs, organism recognized by the IOC – International Olympic Committee) are 102. The Festival (Directed by Prof. Franco Ascani FICTS President), to free entrance, has recorded in the past editions, a participation of 200.000 spectators.

THANKS BY THE FICTS PRESIDENT PROF. FRANCO ASCANI

“In the name of the Organizing Committee of “Sport Movies & Tv 2008 – 26th Milano International FICTS Festival” I wish to express the warmest thanks to those who have shown interest in the initiative, to the people working in the world of sport, cinema, television and communication. Thank you because all together we have reached the aim of promoting sport culture and its values. The edition 2008 that has been concluded with the “Awards Ceremony” in the prestigious location of Palazzo Marino at the Alessi Hall crowded in every order of places, has confirmed the increasing success of the event that close the “World FICTS Challenge 2008” realized, with profitable collaboration and engagement from the FICTS representatives in 12 Seat in the 5 Continents. With the rightful thanks and with the congratulations for the excellent qualities of the products participants, I give appointment to you for the next edition from October 30th to November 4th 2009”.

“Sport Movies & Tv 2008” has enriched its programme of appointments with 14 events (8 meetings, 3 workshops, 2 presentations of editorial initiatives and 2 press conferences) in the Hall Parlamentino at Palazzo Giureconsulti (Piazza Mercanti 2 – Milano). There were present…continue.

The FICTS Executive Committee has expressed an unanimous thanks to the national and international web site which has promoted the “Sport Movies & Tv 2008 – 26th Milano International FICTS Festival”. In fact 71 million were been the web pages that have told about the event on the most known search site in the world “Google”. Among the thousand sites that have brought back the news of the Festival: “IOC – International Olympic Committee”, “Beijing 2008” official web site of next “Olympic Games”, “AIPS – International Press Sport Association”, Panathlon International, “Yahoo Sport”, “Telegraf On Line Constanta” (Romania), “Iranian Journal”, “Indian Tv on-line”, “Technogym.com” site of the company official supplying for “Olympic Games Beijing 2008”, “Cdnfilm.com” (China), “Youtube” the most famous video sharing website, “Sporteconomy” the Italian Politic and Economic web site, “Gazzetta.it” on-line version of the daily Italian newspaper…continue.

All the Pictures of the “Sport Movies & Tv 2008 – 26th Milano International FICTS Festival”, (that has take place from October 31st to November 5th at Palazzo Giureconsulti in Milan) branched for each event, are available on www.sportmoviestv.com/photogallery.asp – Choose the gallery ”Sport Movies & Tv 2008” where you can download and the pictures. The Official Catalogue (104 pages) with published synopsises, pictures, timetables and day of projection is on-line on http://sportmoviestv.net/catalogo2008/Catalogo%202008.pdf. The Trailer of the video at link http://sportmoviestv.net/video/index.asp?l=0. The Press Folder is available at the following link:

PARTNERS OF THE FICTS

On the occasion of “Sport Movies & Tv 2008” have taken place two Exhibitions that have registered a great crowd of passionate. “Lo sport nelle figurine Panini” proposed by the historical company “Panini” with the offical presentation during the Press Conference of the new collection ““Football Real Action cards 08-09” and “Lo sport e la dolce vita” cured by Didi Gnocchi…continue.

THE STAGES OF THE “WORLD FICTS CHALLENGE 2009”

The temporary calendar (the official will be fixed, by the FICTS Executive Committee) of the “World FICTS Challenge 2009” (WFC), the International Circuit which finishes with the World Final of “Sport Movies & Tv” in Milan, has been approved by the Board of Trustees. The seats of the “WFC” are the following ones: Mombay (India); Kazan (Russia); Liberec (Czech Republic); Gydnia (Poland); Kransgorsk/Moscow (Russia); Hanoi (Vietnam); Tashkent (Uzbekistan); Tehran (Iran); Kampala (Uganda); Lipetsk (Russia); Philadelphia (Usa). The World-wide final of “Sport Movies & Tv 2009” will take place in Milano (Italy) from October 30th to November 4th 2009.