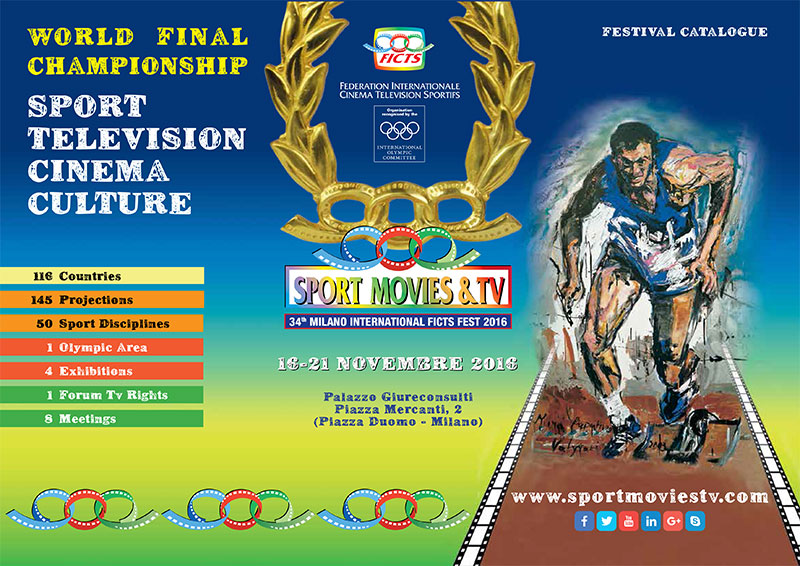 The Press Conference presentation of “Sport Movies & TV 2016 – 34th Milano International FICTS Fest” Final of 16 Festivals (around the 5 Continents) of the “SPORT E-MOTIONS World FICTS Challenge” World Championship of Television, Cinema, Communication and Sport Culture will take place on Tuesday November 8th at Sala Parlamentino of Palazzo Giureconsulti (Piazza Mercanti, 2 – Milano). FICTS President Prof. Franco Ascani will inform media about “Sport Movies & TV 2016” program as well as the prestigious sport, cinema, Tv and journalisms names, 120 international film directors that will attend to the Festival, the films in “Nomination” selected among 958 ones from 63 Countries in 51 Sports Disciplines (with 30 European and Worldwide Previews).

Six days of Tv, Cinema and Sport Culture (entrance with free accreditation available at link http://sportmoviestv.net/en/registration-form/) at the seventeenth-century Palazzo Giureconsulti, in the heart of Milan (Piazza Mercanti 2 – Piazza Duomo) will be the “core business” of the event (admission by invitation with accreditation) with 145 Projections (among which 30 worldwide and European premieres in 6 points of projections), 8 Meetings, 2 Workshop, 6 Exhibitions, 2 Press Conference, 30 Awards of international guests, 7 Side Events distributed in different locations around Milano in collaboration with sports and cultural organizations as well as with BMW Milano and Sergio Bonelli Editore  founder of the leading publisher of comic book market on the occasion of 30 years of “Dylan Dog”.

“Sport Movies & Tv 2016” – dedicated to the memory of Bud Spencer and Pietro Mennea – will become a privileged meeting place for 5000/6000 operators and industry experts from around the world including. The “Opening Ceremony” will be held on Wednesday, November 16 (at 6 p.m.) at Palazzo Giureconsulti (Piazza Mercanti, 2 – Milano) with the inauguration of the Exhibitions: “Art in movement” of the famous Greek visual artist Mina Papatheodorou – Valyraki, “IOC Sports Artist of the Year 2014”; “Heroes of Bonelli”, Dylan Dog, Tex and the characters of Sergio Bonelli Editore; “Sport and Motors” cured by BMW Milano; “The Champions League Cup of AC Milan” with the jersey of Paolo Maldini and Massimo Ambrosini cured by“Casa Milan”; “2022 Beijing Winter Olympic Games” cured by BODA – Beijing Olympic City Development Association.

From November 17 till 20 (from 3 p.m. – 10.30 p.m.) will be scheduled Projections, Exhibitions, Conferences, Events. Inside Palazzo Giureconsulti will feature the “Olympic Area” which will host the most significant images in to relive the excitement moments of 2016 Rio Olympic Games as well as the “Olympic film” of all-time together with productions about the Games come from the world’s most important Networks.

This year the access to the Festival is only reserved for those who are accredited (free Accreditation). In order to participate – besides to the Press Conference – also to Projections, Workshops, Meetings as well as in the Ceremonies fill in the form at http://sportmoviestv.net/en/registration-form/.