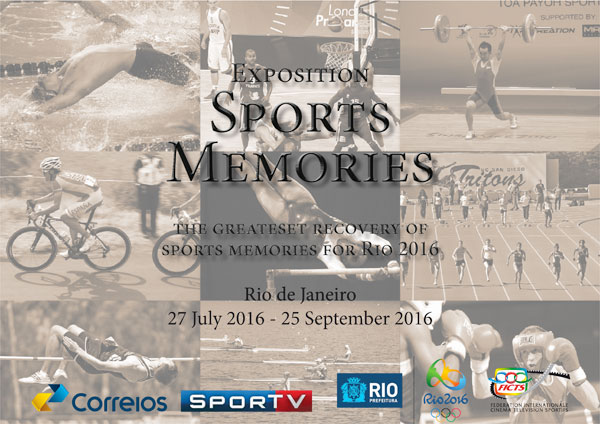 FICTS patronages and supports the “Exposition Sports Memories Rio 2016” scheduled in Rio de Janeiro from 27 July to 25 September during the 2016 Rio Olympic and Paralympic Games. The event will successively move to San Paolo as well as to Brasilia.

The itinerant event – part of the “World FICTS Challenge” Worldwide Championship of Cinema and Sport Television – is an audiovisual Exposition that intends to show, as a result of 10 years precious work, the history of International, Brazilian and Olympic sport through the cinema lenses over more than 100 years. The Exposition, organized by Guanabara Filmes (chaired by Josè Soares) under the aegis of Fédération Internationale Cinéma Télevision Sportifs in collaboration with the Government of the City of Rio de Janeiro, with the Brazilian Post Office (Correios) sponsor of the local Organizing Committee for Rio 2016 Olympic Games, aims to enhance the universality and the positive values of sport through the exciting images of esteemed directors and qualified workers in the world of cinema and television.

The “Exposition Sports Memories Rio 2016” – that will be held in the Post Office Centro Culturale “Core Business” of the manifestation – will be articulated in three part: 1) Worldwide sports History; 2) Brazilian sports History; 3) 2016 Rio Olympics with a room where will be possible watch live trough 16 HD channels, the Rio 2016 Olympics and Paralympic Games.

FICTS President Prof. Franco Ascani will attend to the event articulated in projection (60 sports disciplines from 60 Countries as well as Olympic footages), Meetings and Awards among which SporTv, biggest sports channel in Brazil.