LOS ANGELES HAS UNVEILED ITS LOGO FOR CITY’S BID OLYMPIC GAMES 2024. A SOARING ANGEL WITH OUTSTRETCHED ARMS AND LEGS ILLUMINATED 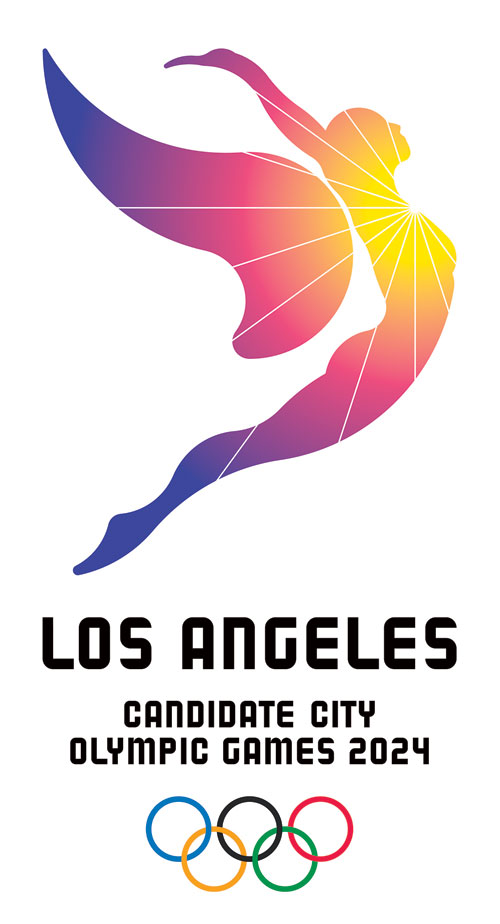 Los Angeles has unveiled its logo for the city’s bid to win the 2024 Olympics, displaying it on a digital screen.

The logo is a figure of a soaring angel with outstretched arms and legs illuminated by the rays of the sun, which emanate from a point of light at the figure’s heart in a palette of purple, red, orange and yellow, colors often seen in the city sky at sunrise and sunset. The city’s slogan for the bid is “Follow the Sun”.

Three-time Olympian Thiago Pereira of Brazil, who lives and trains in Los Angeles in preparation for swimming in his home country’s Olympics this summer, endorsed the city’s bid.

A short film featuring the city asked people what they will be doing in 2024. Among those featured were Los Angeles Lakers superstar Kobe Bryant, actress Jessica Alba, comic actor Will Ferrell, four-time Olympic champion diver Greg Louganis and Evans.

The ceremony was followed by a screening of the upcoming film “Race,” which tells the story of U.S. track star Jesse Owens and his preparations for the 1936 Olympics in Berlin.

Los Angeles, which hosted the Olympics in 1932 and 1984, is competing against Budapest, Paris and Rome for the games. The International Olympic Committee will choose the host city in September 2017 in Lima.